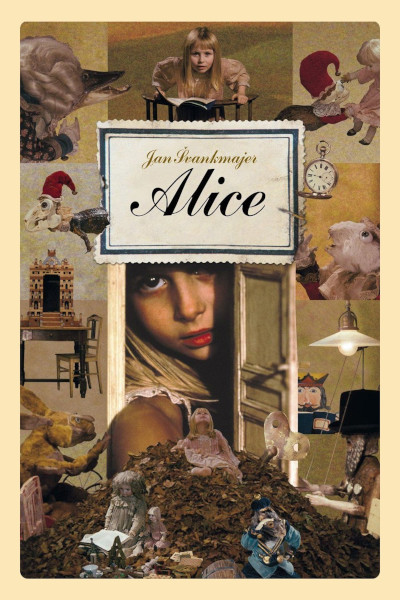 When Alice follows the White Rabbit into Wonderland, so begins this dream voyage into the astonishing landscape of childhood, the caterpillar is a sock with false teeth and big bulging glass eyes and the white rabbit snacks on sawdust , through many dangerous adventures, and ultimately to Alice’s trial before the King and Queen of Hearts. Dolls, string, keys, tins cups, taxidermy, glass eyes and socks are just intelligently placed in the story without much explanation, because honestly, the ghastliness of it all speaks volumes.

Jan Svankmajer has created a masterpiece of cinema, a sincere original interpretation of Lewis Carroll’s classic tale. Svankmajer’s Alice remains true to the absurdity of Carroll’s original, but bears the stamp of his own distinctive style and treatment. Alice stands above those for its calculated illogic and lyrical intelligence. Svankmajer’s embraces the episodic nature of Carroll’s tale and makes it seem surprising again in spite of its familiarity.