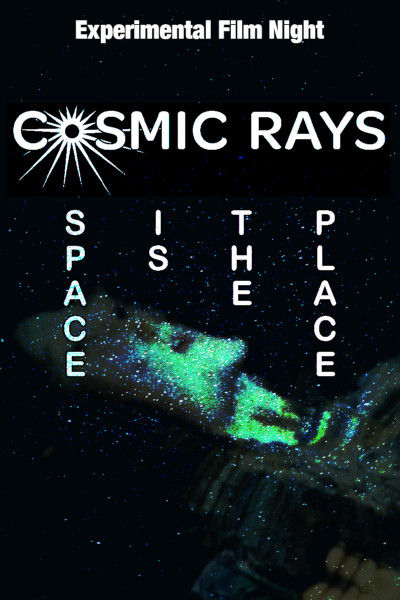 Cosmic Rays is pleased to announce its new TOURING PROGRAMS curated in collaboration with filmmaker John Winn during his 2022 Cosmic Rays internship.

Tonight’s program is “Space is the Place”

A program of short films that explore outer spaces and inner spaces. Taking a variety of formal approaches, these cosmonautical films map star systems high above or deep inside.

Space is the Place
Rupert Jörg
A photographer tries to harmoniously combine a small child with symbols of state violence in one photo.

Seeing Spacecraft Earth
Lisa McCarty
A pulsating cosmic montage; an alternative view of the seminal Earthrise photograph. We are all astronauts whether we like it or not.

Laika
Deborah Stratman
Some forms we can only know by their shadow. In homage to the spirits of space test dogs, or any being we use in the name of progress. Made by invitation of composer Olivia Block for the release of her album Innocent Passage in the Territorial Sea.

Of this Beguiling Membrane
Charlotte Pryce
The story unfolds on the Eve of Midsummer: on the day when the threshold between worlds is porous, and an idle gesture can tempt fate. Inspired by Robert Kirk’s The Secret Commonwealth (1671), this work takes the outward form of a nature film. But observation gives way to illusion and the surface gives way to murky waters strewn with debris of those who have succumbed to its lures. (The Lady of Shalott, Ophelia). They remain trapped; menacing reminders of the dangerous seduction of beauty, and anger of the elusive spirits who resent being examined.

Continental Drifts
Georg Koszulinski
A fictional account of David Koresh’s last words, a cursory analysis of the pantheon of Icelandic sagas, a home movie taking into account 20 years of filming on an old Bolex 16mm camera, a series of reflections on the destructive nature of industrialized societies: a collage film, metaphysical road trip movie in time of pandemic and social uprising. A point-and-shoot epistolary fever dream collage film made in times of multiple crises.

in ocula oculorum
Anna Kipervaser
An interrogation of the unknown and the internal, in both subject matter and experience. Dealing with the contemporary state of perpetual doom, the film contemplates various stages of life and death from the point of view of our human bodies and perceptual systems. It explores beta movement and phi phenomenon, pushing the limits of intermittence and persistence of vision, playing with our innate desire for continuity and cohesion by forcing image slip.

Time Crystals
Abinadi Meza
This synthetic narrator remembers time through images. Real, fantasy or something in-between, the narrator describes finding patterns in time, which “she” calls time crystals. We do not know if this enigmatic film is a record, a signal, or a dream.

To Live and Die in the Shadows: Meditations on Ferns, Survival, and Horizontal Gene Transfer
Shannon Silva
180 million years ago, through a chance horizontal gene transfer, ferns acquired a much needed light sensor (neochrome) that allowed them to modify and survive in low light environments. We should all be so lucky.

If a Tree Falls in a Forest
Leonardo Pirondi
Following the discovery of a mysterious metal structure in the desert, this film documents the encased objects found within the structure. This film is made up of speculative recreations of the study conducted, analysis of the found objects, and surrounding landscapes.

Sprocket Damage
: Sprocket Damage digs deep(ish) into current and classic films and film-related subjects to bring to you insightful, humorous, and enlightening perspectives on the industry.