Doc on Sudanese refugees shows outsider's view of the U.S. 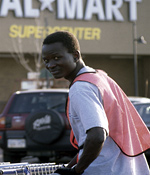 Islamist extremists in the north of Sudan have been killing the non-Muslims of the south. Nine years ago, 20,000 boys escaped to Kenya, their parents dead or missing. From the refugee camp, they have been emigrating in small groups to the U.S. and elsewhere. Lost Boys of Sudan follows two African immigrants, Peter and Santino. This documentary shows an outsider's view of our own country; what we take for granted, they have to be taught, from the kitchen sink to using deodorant. Peter moves to Kansas City, while Santino stays in Houston. Lost Boys of Sudan crosscuts between their parallel but similar stories. Is life in the U.S. any better than it was in Kenya? They carefully duck the question, saying only that they've learned, in spite of their streets-paved-with-gold expectations, that there is no Heaven on Earth. Source: Marty Mapes, Movie Habit.