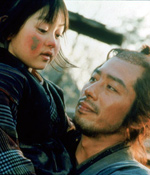 If ever a samurai film could be called a chick flick, this is the one. Iguchi (Hiroyuki Sanada) is a low-ranking samurai who leads a very humble life. He is an accountant in his clan lord's quartermaster office, and evenings he works at home assembling cricket cages for extra money. He is raising his two young daughters alone. When his dad tries to fix him up with a woman, Iguchi refuses to answer until he's spoken with his daughters about it. Phil Donahue would be proud. Meanwhile, unrest is growing in samurai politics, and Iguchi's skill with a short sword may get him "volunteered" to fight. The Twilight Samurai evokes sadness and loss. The way of the samurai is dying. When samurai are glorified clerks, one could say the way is already dead. His devotion to his daughters is not so much joyful as quiet and tender. When he duels, it is reluctantly, and only because his sense of duty compels him. Source: Marty Mapes, Movie Habit.