Suggests what Jacques Tati may have done with rural America 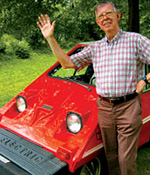 This quirky little tale of lost love, demolition derbies, electric cars, a sick turtle, a missing dog and a power outage will not appeal to everyone. In fact, those who like their narratives to be linear and obvious will least appreciate this oddly touching movie, though if they gave it a shot they just might find that it grows on them after a while... like an interesting, colorful fungus.

When Don (Will Oldham) disappears, Sadie (Sheila Scullin) does nothing but pine. Luckily, the perpetual loser Stool (Rich Schreiber) is there to comfort her and fill the void.

There will be people who say this film tries too hard to be weird, and there are places where that would be a valid criticism. Regardless, this is still an entertaining and visually exciting film. It has an oddly meandering pace that is riddled with quirky characters in weird situations. The entire project actually has the feel of "Napoleon Dynamite" as if remade by David Lynch, only without all the horrific elements he likes to toss into his work. Writer/director Todd Rohal put a lot of love into this baby, and it shows. It's too bad that some people won't appreciate his efforts, though, but that's always the case with any kind of art worth creating. (D. Brunell, Film Threat)