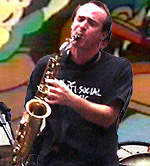 Gutbucket, a contemporary jazz ensemble formed in the spring of 1999 in New York City, have produced three albums (their newest, ‘Sludge Test,’ just came out in March) and have toured throughout the United States as well as Europe. Their performances have include such antics as getting dressed up as muppets, playing glow-in-the-dark, blindfolded, throwing toast and tossing giant beach balls at the audience.

They will be proving the live musical accompaniment for an animated film called "Johnny the Giant Killer," made by Jean Image and Charles Frank in 1950 about a young boy who sets out with a bunch of friends to defeat an evil giant.

It's a truly strange cartoon -- the first half of the movie is incredibly surreal, while the second half of the movie largely deals with Johnny's encounter with a civilization of bees, which he must win over if he has any hope of getting their help to save his friends still trapped in the castle. The animation is unlike anything you might see in a Disney film, making it all the more intriguing. (N. Reed, MovieHabit.com)