As entertaining as The Cup and filled with Buddhist spiritual teachings 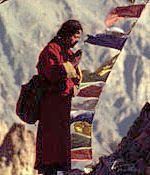 Milarepa – This debut feature by Chokling Rinpoche tells the story of the formative years of Milarepa, an 11th century Tibetan poet and mystic and his journey from seeking revenge to enlightenment. Set in the magnificent Spiti Valley close to the border between India and Tibet, the film has spectacular cinematography and convincing performances from a diverse cast that includes monks from the Pema Ewam Choegar Gyurmeling Monastery in India and Tibet of which Chokling Rinpoche is the spiritual head. (CineScene)