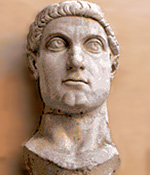 A compelling addition to the genres of history and memoir, Oren Jacoby's documentary adapts and updates author and former Catholic priest James Carroll's book about the dark side of Christianity. In Carroll's search for understanding of atrocities committed in the context of religious intolerance, he considers the history of anti-semitic violence, investigates religious infiltration of the US military and its influence on the country's foreign policy, and considers his responsibility as a priest for fomenting intolerance between religious groups.

X marks the spot, literally, where Christianity and the Catholic Church fostered the centuries of religious hatred and anti-Semitism that culminated in the Holocaust. So argues James Carroll in his 2001 book Constantine's Sword and in this searching, intellectually lively documentary. Carroll, the former priest turned National Book Award–winning novelist, journalist, and memoirist, claims the die was cast in the year 312, when Constantine I claimed his decisive Roman victory under the sign of the labarum. Once the cross displaced life-giving emblems (shepherds, fish) as the symbol of Christianity, the religion made Christ's death its rallying point—providing a handy weapon against the fingered murderers, Europe's thriving Jews. (In the sharpest of the movie's recontextualized film clips, Dustin Hoffman as Lenny Bruce takes the rap with a shrug.) How long could the damage linger? Fast-forward almost two millennia to the U.S. Air Force Academy in the evangelical hotbed of Colorado Springs, where Jewish cadets—including the children of a Reagan White House associate—face thousands of brass-sanctioned flyers for The Passion of the Christ and insistent proselytizing. Journeying from Colorado to Rome to Auschwitz with his own tangled father-son military history as a running thread (and director Oren Jacoby heightening the tone of moral imperative), Carroll runs the risk of conducting a Gray Line whirlwind tour of religious intolerance. But if his film is more provocative personal inquiry than reportorial knockout punch, it still pokes needed holes in the concept of papal infallibility and provides historical context for the dangers of linking the church and military. If nothing else, it demonstrates why we should feel cold shivers whenever President George W. Bush bandies the term "crusade."