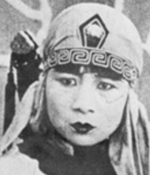 A 1929 silent martial arts film, made at the height of Shanghai's martial-arts craze, RED HEROINE is the story of a maiden kidnapped by outlaws. She is rescued by "White Monkey" (director Wen Yimin), a mysterious Taoist hermit. After three years of study with him, Yun Mei reemerges a warrior who flies up to the sky to avenge her mother's death.

This screening of this rare, surviving silent martial-arts picture -- most were destroyed during the Communist revolution -- will be accompanied by the live music of the Devil Music Ensemble, three multi-instrumental musicians from Boston, Mass., known for their transporting percussive style and instrumentation in their performances of original scores. The score that the Devil Music Ensemble has composed for RED HEROINE has influences in traditional Chinese classical and folk music, as well as classic kung-fu film soundtracks.