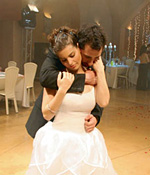 A complex, often comedic portrait of contemporary life in Israel, JELLYFISH tells the story of three Israeli women living in Tel Aviv: Batia (Sarah Adler), a catering waitress, who takes in a young child she discovers, apparently abandoned, at a local beach; Keren (Noa Knoller), the bride at a wedding in the Caribbean at which Batya is one of the servers; and Joy (Ma-nenita De Latorre), one of the wedding guests, a maid who is brought by her employer from the Phillippines and frets about having left her young son at home without her. When Keren breaks her leg climbing out of a toilet stall during her reception, her dream vacation is derailed and the three characters' paths cross, divide, and cross again.

Predicated on the spectacle of functionally depressed types stuck in mildly ridiculous situations not entirely of their own making, the Israeli ensemble comedy Jellyfish has an emotional resonance beyond its controlled slapstick and deadpan sight gags. A beautiful bride is trapped in a toilet stall—don’t ask—and, breaking her leg upon climbing out, is forced to relocate her honeymoon from a Caribbean dream beach to a Tel Aviv dump. A non-Hebrew-speaking, exceedingly homesick Filipina guest worker is hired to look after a particularly unpleasant old lady, who is herself longing for—while also repelling—the attentions of her equally difficult grown daughter. A klutzy yet appealing waitress breaks up with her boyfriend and is briefly adopted by a mysterious, wide-eyed five-year-old who walks naked out of the Mediterranean. These couples become estranged and reconciled in various ways and occasionally cross paths. Co-directed by the bestselling Israeli writer Etgar Keret and his wife, dramatist-director Shira Geffen, Jellyfish regards its essentially lonely characters with a gaze both tender and lethal. An Israeli movie with neither politics nor religion—and only one casual, if fraught, mention of the Holocaust—Jellyfish bespeaks an underlying desire for normality that’s as poignant and fantastic as Keret and Geffen’s modest, shabby Tel Aviv settings.