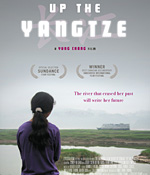 Through the stories of two young Chinese hired to work on the last tourist cruise ship up the Yangtze River before a new dam is built, UP THE YANGTZE details the brutal forces of change at work on China's people, culture, and environment. Directed by Chinese-Canadian documentarian Yung Chang.

Imagine the Grand Canyon turned into a lake. That image is summoned by Yung Chang, the Chinese-Canadian director and occasional narrator of “Up the Yangtze,” an astonishing documentary of culture clash and the erasure of history amid China’s economic miracle.

The film explores the incalculable human impact of the giant Three Gorges Dam project on the Yangtze, China’s longest river. When completed, the 600-foot-high dam will be the largest hydroelectric project in the world. As we watch the steadily rising water swallow more and more of the landscape, the film conveys an ominous sense of a society changing too fast in its stampede into an unknown future.

The dam, suggested by Sun Yat-sen and later supported by Mao Zedong, but not begun until 1994, is expected to be finished sometime in 2011. Not since the Great Wall has China undertaken such a massive engineering project.

By the time the dam is completed as many as two million people will have been relocated to new homes from the flooded area. As one struggling merchant forced to move from his riverside home explains before breaking down in tears, the Chinese people are expected to “sacrifice the little family for the big family.”

“Up the Yangzte” is the second recent film based around the project. “Still Life,” Jia Zhangke’s haunting docudrama, was about a man and a woman who never meet while searching for their mates in Fengjie, a town in the process of demolition. It was drenched in a mood of despair.

The more sociologically oriented “Up the Yangzte” is largely set aboard a ship making what are billed as “farewell cruises” up the river. Many of the tourists, we are told, come expecting to see the “old China” before it disappears. As the boat sails upriver, the landscape is spectacular. At the same time the yellowish haze over the water suggests China’s already serious air pollution problem. There are brief glimpses of cities whose gaudy wall-to-wall signs match those of the Las Vegas Strip or Times Square. In these cities what remains of the old China is hidden by the glitter.

Beyond Mr. Chang’s reflections on the country as described to him by his grandfather, the movie refuses to editorialize. It lets the images demonstrate the degree to which the old China has already disappeared. What emerges is a country in the throes of rampant economic development and the global homogenization it augurs.

The movie offers an “Upstairs, Downstairs” view of life aboard the vessel, which is crowded with well-to-do American and European tourists catered to by a Chinese staff that is minutely drilled on proper etiquette: Never compare Canada and the United States; never call anyone old, pale or fat (plump is O.K.); never talk about politics.

The movie observes the culture shock felt by two young employees. Yu Shui, the 16-year-old daughter of illiterate peasants who can’t afford to send her to college, is a reluctant dishwasher. Like the other employees she is given a Western name, Cindy. Miserable, sullen and homesick, she has a difficult time adjusting. Meanwhile her parents, who are forced to leave the riverbank where they have survived by growing vegetables and fishing, are shown carrying out the backbreaking labor of moving to a new location.

Chen Bo Yu, renamed Jerry, is a cocky, good-looking go-getter from a middle-class background. We are told he is an example of the “little emperor” phenomenon in which male products of the country’s one-child policy grow up spoiled and entitled. Shortly after Mr. Chen begins receiving generous tips, his cheerful but hard-nosed boss confronts him with complaints from tourists that he is soliciting tips. As he engages an American teenager in small talk about girls and sports, he seems eager to shed his national identity and make money: the more the better. All the while the water continues to rise.