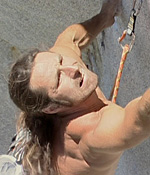 The exploits of two brothers, radical climbers who want to break all previous records for ascending the world's most famous climbing route, "The Nose" of El Capitan, in California's Yosemite National Park. Pepe Danquart's documentary probes the extremes to which the speed climbers go to reach their goal.

So nerve-racking is its death-defying rock climbing footage that To the Limit could have easily been renamed Vertigo without giving the master of suspense any postmortem unease. Brothers Thomas and Alexander Huber are two of the world's best climbers and one of the fastest teams, literally living life on the edge as they attempt to break world records at what is called "speed climbing"—an extensively trained practice that allows one to cover in mere hours distances that normally take an average of several days. On the flipside, theirs is a practice that requires absolute perfection; death remains an ever-present threat even when secured to the mountain via rope, as but one wrong step could leave you dangling indefinitely with little to no hope of rescue. The Hubers' latest target is El Capitan, a 3,000-foot vertical rock formation in Yosemite Valley; once thought impossible to mount, it is now among the most popular routes in the world. Thomas and Alexander are amazingly graceful machines as they aid each other in scaling the incline, utilizing every tool at their disposal as they scramble about at angles most would think impossible outside of a zero-gravity environment. Emphasizing its visceral punch more than its character examinations, To the Limit proves somewhat lopsided as events go in directions unexpected: An unfortunate injury forces the attempted record-setting El Capitan climb back a year, while one long-awaited expedition is tragically cut off (during the final stretch of climbing, no less) due to encroaching weather. Slow-mo sequences emphasizing the climber's fears (namely, falling and death) play like a ball of cheese thrown erroneously into the mix, and though the bulk of the film comes off not unlike a Discovery Channel's attempt to emulate the inquisitive, naturalistic tones of a Werner Herzog documentary, To the Limit nevertheless manages to unearth some of life's (and death's) profundities amid its own particulars.