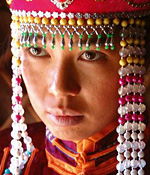 Tuya (Yu Nan) is a hardworking and beautiful shepherdess who decides that to help her family survive she must divorce her husband and seek a new spouse who will care for her and her disabled husband, in this contemporary drama by Wang Quan An.

An ethnographic melodrama about the pressures facing contemporary Mongolians, Tuya's Marriage concerns the efforts of shepherd Tuya (Yu Nan) to find a new husband after she suffers a serious injury caused by labor strain that could potentially lead to paralysis. Given Tuya's beauty and impressive work ethic, she's soon inundated with suitors, yet the mother-of-two's devotion to her disabled husband, Bater (Bater), with whom she is determined to continue supporting even after finalizing their divorce, makes the process difficult. Chinese director Wang Quanan's film isn't particularly interested in surveying the historic customs and rituals of Inner Mongolians, but it does capture the backbreaking arduousness of their day-to-day life, which for Tuya involves herding her flock of sheep, lugging water 30 kilometers to her home from a half-finished well (the creation of which left Bater lame), and tending to her kids and incapacitated husband, all while contending with a friend named Senge (Senge) who's run ragged by his cheating wife and who not-so-secretly loves Tuya. In some of its characterizations and dilemmas (such as Tuya's attempt to make a go of it with a former classmate who callously ditches Bater at an urban nursing home), Tuya's Marriage can feel a tad overwritten, but in terms of its cultural and emotional portraits, the film's neo-realist authenticity is nonetheless striking. Much of this can be credited to the commanding Yu, whose wind-burned toughness and resoluteness are complemented by a burdensome combination of anger, loneliness, and sorrow. It's also, however, attributable to Wang's honest depiction of the struggles confronting Mongolians, a people who continue to survive thanks to a collective devotion to camaraderie and compassion, yet whose tradition-bound existence—slowly being suffocated into obsolescence by encroaching power lines, cities, and modern mores—is, as Tuya's exhausted marriage-day tears suggest, an increasingly grueling one to maintain.