The Red Balloon with White Mane 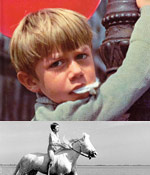 A friendly balloon leads a boy into the streets of Paris in French director Albert Lamorisse's 1957 short fantasy. In Lamorisse's earlier short, WHITE MANE, a boy helps a wild horse escape the ranchers who want to break him.

The Red Balloon, which is only thirty-four minutes long, is an utterly charming little story of a small Parisian lad and a balloon—a balloon he finds one day, lurking around a lamp-post, while he is on his way to school, and which takes a fancy to him and follows him thereafter like a loving stray dog.

It is a thoroughly simple story of something incredible that could not occur except in the bright imagination of an artist such as Albert Lamorisse, the young Frenchman who made the memorable short WHITE MANE and who wrote, produced and directed this. Yet with the sensitive cooperation of his own beguiling son and with the gray-blue atmosphere of an old Paris quarter as the background for the shiny balloon, he has got here a tender, humorous drama of the ingenuousness of a child and, indeed, a poignant symbolization of dreams and the cruelty of those who puncture them.

This little film, which won a special award at the Cannes Festival, is without dialogue. Its sound track has merely music, random voices and street sounds.

One of the most beautiful films ever made. Shot in the Camargue, France's wildest, loneliest region, it's a fable--a tragic fairy tale--about a boy's love for the horse he alone is able to tame. Hunted down by a band of men who want the animal, the boy and his horse head out to sea rather than face capture. The filmmaker was Albert Lamorisse; his intentions were clearly to achieve a piece of visual poetry--unlike most filmmakers who head that way he succeeded.

The Red Balloon with White Mane