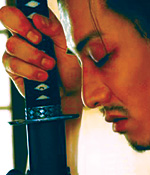 A samurai is blinded in his work as a feudal lord's food-taster in this third installment of director Yoji Yamada's samurai trilogy (THE TWILIGHT SAMURAI, THE HIDDEN BLADE).

“Love and Honor,” the final episode in Yoji Yamada’s samurai trilogy, maintains the grace and resonance of its predecessors as well as their focus on class inequality.

Like “The Twilight Samurai” and “The Hidden Blade,” this is a love story in which a low-caste samurai struggles against circumstance to please both his heart and his conscience. This time the hero is Shinnojo (Takuya Kimura), a young food taster stricken by blindness after eating bad shellfish intended for his clan lord. Faced with the loss of his annual stipend, Shinnojo contemplates suicide while his coldhearted relatives secretly push his adoring wife, Kayo (Rei Dan), into the arms of an influential samurai on whose gratitude their survival may depend.

Best known in Japan for the astonishing 27-year run of the “Tora-san” movie series, Mr. Yamada has used the trilogy (based on stories by Shuhei Fujisawa) to explore a richer, more sober and less sentimental view of his country’s history. His protagonists are aware of the unfairness of the caste system and are beginning to rebel; when they fight, it’s with reluctance and because they have no other choice. By staging these confrontations in symbolically decaying locations — a rotted house in “The Twilight Samurai,” an abandoned stable here — he reminds us that the codes and conventions of feudalism may be punishing, but they are also impermanent.