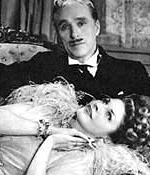 Charlie Chaplin rewrote Orson Welles' idea for the script, inspired by the case of a notorious French serial killer who kills for money. The craven and unrepentant lead character in the film was Chaplin's first feature as a character other than “The Tramp.” Audiences widely boycotted the cynical MONSIEUR VERDOUX upon its release, but the film has since been recognized as one of Chaplin's greatest films.

Anyone who accuses Charlie Chaplin of too much sentimentality clearly hasn't seen Monsieur Verdoux, arguably the crown jewel in the Chaplin canon.

Treated like the plague when it first opened, Monsieur Verdoux has also been more staunchly defended than any other Chaplin film. James Agee took three columns to write about it, even though it had already left theaters by the time the third column was published. Jonathan Rosenbaum named it one of the greatest American films of all time and railed when the AFI left it off their "Greatest Comedies" ballot. Such luminaries as critic Lotte Eisner and filmmakers Federico Fellini, Jacques Rivette and Luchino Visconti have named it one of the ten best films of all time.

Even Orson Welles became the target of vicious attacks. Welles had wanted to write the script and direct Chaplin in the film, but Chaplin decided that it was too late for him to start acting for other directors and so he did his own version, crediting Welles with the "story suggestion." Because of this association, Welles became more of an outcast and a troublemaker than he already was by that time.

Chaplin plays Henri Verdoux, a bigamist and serial killer who makes his living by marrying and murdering rich widows under assumed names. Chaplin softened the character and made him palatable to audiences by making him a lifelong bank worker who was laid off in middle age, too late to start over. He has a "real" wife and children at home whom he rarely sees because he's on the road all the time. The film has a great running joke: an image of train wheels accompanied by the same frenzied bit of "traveling" music (composed by Chaplin).

One of the film's high points comes when Verdoux tries to murder the superb Martha Raye, but continually fails thanks to her good luck. These are the most slapstick-oriented scenes in the film, and the funniest. And it's the first time Chaplin allowed another actor to outshine him onscreen.

Monsieur Verdoux might have been just another black comedy, but Chaplin hotwired the film into the postwar mood of the country, wondering why, if countries can kill thousands during war, what he was doing was any different? "Numbers sanctify," he says in the famous closing speech. At the same time, he takes his first sip of alcohol and gets a prize look on his face.