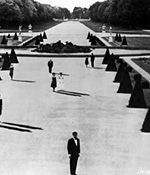 Director Alain Resnais' meditation on chronology, perception, and memory is set in a luxury hotel in Austria, where a man asks a woman if she still plans to leave her husband and run away with him. But have they ever met? The film was a hit with Paris audiences upon its release in 1961; it enthralls and confounds viewers to this day.

The winner of the 1961 Venice Film Festival, Alain Resnais's Last Year at Marienbad returns to us after years of public-domain limbo in a sumptuous new print. Back in the day, literal-minded audiences had great fun pretending to be baffled by this artiest of European art films. Basically, Last Year at Marienbad— which Resnais directed from an original screenplay by "new novelist" Alain Robbe-Grillet—is a situation. The politely avid X (Giorgio Albertazzi) pursues the mysteriously diffident A (Delphine Seyrig) through a huge, mirror-encrusted château, complete with formal garden—"a universe," as Robbe-Grillet described it, "of marble and stucco, columns, moldings, gilded ceilings, statues, motionless servants." Gloomy organ music underscores the proceedings as X insists against A's protestations that a year ago she'd promised to leave her husband M (the cadaverous Sacha Pito) and go off with him. The tension is never resolved: Is X casting a spell or breaking one?

One thing is certain: Breathtaking in her slouch, the irresistible Seyrig—whose only previous film appearance had been as the put-upon beatnik wife in the entirely different art-house hit Pull My Daisy—transforms the noun "arabesque" into a verb. (Later, the Method-school actress would reveal that many of her poses were improvised on the set.) This languid, elaborately coiffed and bejeweled creature—her beyond-Dietrich outfits designed by an uncredited Coco Chanel—embodies obsession. Is she married to Death, who never loses the version of pickup sticks that would thereafter be known as the "Marienbad game"? Or is it Death who woos her? In either case, the spectator is similarly obliged to surrender to the movie's incantatory rhythms and sublimely maddening mannerisms—or else leave the theater.

In Paris, where Marienbad was compared to Picasso's Les Demoiselles d'Avignon, the movie was an enormous, record-breaking hit with audiences queuing around the clock at the chic Champs-Élysées cinema where it opened. When Marienbad premiered in New York the following spring at the old Carnegie Hall Cinema, Bosley Crowther, the proudly square New York Times critic, hailed it as "the 'furtherest out' film we've ever had." Jonas Mekas responded in the Voice that this only showed how little local reviewers knew about what was going on in contemporary cinema—Maya Deren and Stan Brakhage, for example. Certainly, Marienbad popularized a particular and then dated surrealist aesthetic. (Its two antecedents are Joseph Cornell's film assemblage Rose Hobart, a portrait of the actress that Resnais could not possibly have seen, and Adolfo Bioy Casares's novel The Invention of Morel, a fantastic adventure positing a cinematic virtual reality, which Robbe-Grillet certainly had read.)

Marienbad eludes tense. The movie is what it is—a sustained mood, an empty allegory, a choreographed moment outside of time, and a shocking intimation of perfection.