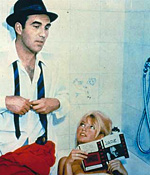 A failed playwright (Michel Piccoli) is hired to edit a screenplay about Ulysses to make it more commercial in Jean-Luc Godard's subversive commentary on artistic integrity, marital dissolution, and the filmmaking process itself. Also stars Brigitte Bardot, Jack Palance, and Fritz Lang (as himself).

In the credit sequence of "Contempt" -- Jean-Luc Godard's 1963 film, re-released in a dazzling new Cinemascope print under the sponsorship of Martin Scorsese -- an imposing Cinemascope camera turns and points directly at us, as if we were somehow being called to witness a time when giants presided over the movies. "Contempt" evokes an era when the belief that movies mattered was an article of faith, when there seemed no turning back from the endless potential of movies, and when an eager (if not always large) audience existed for the directors ready to realize that potential.

Nobody tried to get more of those possibilities on screen than Godard. "Contempt" is the sixth of the 15 movies he made between 1959 and 1967, a run still unequaled by any director since in its exploration -- and exhaustion -- of what movies could do. But "Contempt" has always seemed the misfit among the director's '60s work, his one foray into the world of glossy international co-production. The largeness of the film's scale (which has partly to do with the use of Cinemascope) is light-years away from the caught-on-the-run feel of "Breathless" or "Vivre Sa Vie." And the mournful, almost stately pace of "Contempt" contrasts sharply with the stylistic and intellectual hyperdrive -- Godard's equivalent for the feel of urban life -- that characterized his other films.

The rerelease of "Contempt" is, however, a revelation -- it emerges as one of Godard's most emotional films. Like Olivier Assayas' recent, wonderful "Irma Vep," "Contempt" is a movie about the making of a movie. But if Assayas' film is a sign of life, Godard's is an elegy. "Contempt" ("Le Mepris") links the dissolution of the marriage between a screenwriter (Michel Piccoli) and his wife (Brigitte Bardot) to the end of classical Hollywood moviemaking, represented here by a film of "The Odyssey" directed by Fritz Lang (the director of "Metropolis" and "M," who appears as himself). It's fitting that Godard has Lang working on a film of Homer's epic. He's saying that the world of filmmaking Lang represents is as lost to us as antiquity. What Godard couldn't have foreseen, but what accounts for the overwhelming sense of loss that "Contempt" imparts 34 years later, is that the world Godard himself represents has also vanished.

"Contempt" is built on a single moment of seeming inconsequence. Paul Javel (Piccoli), a promising young French writer, is courted by Jeremiah Prokosch (Jack Palance), a brash, vulgar American producer, to rewrite the screenplay for Lang's film. Paul and his young wife, Camille (Bardot), visit the studio one day, and Prokosch invites them to his home for a drink. He suggests that Camille ride with him in his sports car and Paul follow in a taxi. Despite Camille's objections, Paul agrees. He arrives at Prokosch's to find his wife out of love with him, convinced Paul left her alone with Prokosch so the producer could make a pass at her. While coping with the unraveling of his marriage, Paul has to decide whether to work on the rewrite, which is expressly against the wishes of Lang. From that scenario, "Contempt" becomes another of Godard's explorations of how much of ourselves we can sell and still remain true, a questioning into how love or work is possible in a world constantly urging us to name our price.

On its surface, "Contempt" is a sexy slice of the Euroangst so popular with art-house audiences of the '60s. But the bitter disillusionment, the self-incriminating emotions roiling around beneath that surface are as far as you can get from Antonioni's interminable, distanced movies in which the idle, boring rich suffer and pose photogenically. "Contempt" points the way toward the tortured romanticism of "Pierrot le Fou" and the stunning essayistic brilliance of "Two or Three Things I Know About Her" and "La Chinoise." In it, Godard wrestles with both the breakup of his own marriage to the actress Anna Karina (at moments, Bardot dons a black wig reminiscent of Karina) and his realization that the Hollywood he idolized as a young critic was now turning its back on the filmmakers (like Lang) he revered. Palance's Prokosch is a broad, garish caricature of American money and power, one of the new breed of false gods who had replaced the real thing. The courtly Lang (who had already made his last movie) knows that his "Odyssey" will be wrecked, but he goes on working anyway, almost as if to illustrate Godard's quote: "I await the end of cinema with optimism."

For Godard, movies were always inextricable from women. The faces of Karina, Jean Seberg, Marina Vlady and others seem to carry the whole meanings of his films within them. Here, it's the wounded, slightly feral expression on Bardot's face -- the shocked, defensive look of unguarded love betrayed -- that carries the deepest, most conflicted emotions. (There is no point debating whether Bardot is an actress when her presence is as overpoweringly tender and touching as it is here.) In "Contempt" the betrayal of the movies is echoed in Paul's betrayal of Camille. Godard leaves it open whether Paul consciously prostitutes his wife. It seems more likely that he's guilty of a far more common masculine sin: obliviousness.

The film opens with Paul and Camille in bed, talking silly flirtatious endearments. The scene was ordered by the producers in order to squeeze in a shot of Bardot nude (and she is gloriously so). The scene's relaxed carnal freedom serves as our glimpse of what's shortly to be poisoned in their marriage. The heart of the film is a devastating 35-minute sequence between Paul and Camille in their Rome apartment. The half-hour hotel scene in "Breathless" was about a boy trying to get a girl into bed; this sequence is about what happens when what happens in bed is no longer enough. A thicket of crossed signals and misunderstandings, the scene follows Paul and Camille as they bicker, almost reconcile, then grow more distant, their roundabout squabbling recalling every lovers' quarrel you've ever had with someone who knows you all too well.

Godard called "Contempt" "the story of castaways of the Western world ... [who] one day reach a mysterious island, whose mystery is the inexorable lack of mystery." Everything in the film evokes a pitiable isolation -- the circular movement of Georges Delerue's sorrowful score, the emptiness of the film's apartments and villas and studios and screening rooms. Shot by the great cinematographer Raoul Coutard in hard reds and yellows and blues, "Contempt" paints its actors as solitary figures bathed in a Mediterranean light that's both pitiless and softening. A stray flashback shot of Bardot running by a lake framed with golden fall leaves is a postcard from a lost paradise.

In the last sequence, Lang sets up a shot (which serves as the final shot of the film) of Ulysses gazing at his homeland across the sea after 10 years' absence. It's a homecoming that feels like a leave-taking. Godard was beginning his odyssey in search of what, in "Masculin Feminin," he called "the film we all carried in our hearts. The film we wanted to make, and secretly wanted to live." But seen now, "Contempt" feels as if Godard must have foreseen our current predicament: audiences and filmmakers separate as castaways, catching only occasional glimpses of one another on our separate islands. "Contempt" is a film of farewells, not the least of which is directed to those of us sitting in the theater.