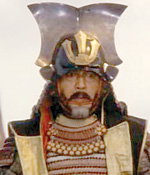 Translated as “the shadow of the warrior,” KAGEMUSHA concerns a thief who is saved from execution by his resemblance to a great warlord. When the warlord is killed, the thief is secretly installed in his place and must assume the qualities of the man he is impersonating.

With Kagemusha, his twenty-seventh feature, Akira Kurosawa, the great Japanese director, returns to the samurai form that originally brought him international popularity to match the acclaim he received from critics around the world. Yet Kagemusha is a far, far different kind of film from Seven Samurai, Yojimbo, and The Throne of Blood, Mr. Kurosawa's Japanese interpretation of Macbeth.

Kagemusha is probably the director's most physically elaborate, most awesome film, full of magnificent views of lines of mounted soldiers slowly crossing grand landscapes or galloping along seashores, against sunsets of a magnificence that seems to foreshadow the end of the world. Kagemusha is majestic, stately, cool, and, in many of its details, almost abstract. It appears very much to be the work of a director who, now seventy years old, is no longer concerned with the obligations of conventional drama or even with moral questions. He is, instead, contemplating history, not as something to be judged but, rather, acknowledged and, possibly, understood.

The time is the mid-sixteenth century when three warlords are competing for the domination of Japan and, in turn, laying much of the country to waste. Kagemusha, which translates as "the shadow of the warrior," refers to a petty thief (Tatsuya Nakadai) who is saved from crucifixion because of his resemblance to Shingen Takeda, also played by Mr. Nakadai, the strongest of the three warlords. When Shingen Takeda succumbs to a sniper's bullets, his followers hush up his death and put Kagemusha on the warlord's throne, hoping his presence will forestall attacks by their enemies.

Kagemusha is partly the story of the thief who slowly acquires the grandeur and vision of the man he is impersonating, partly the story of Shingen's ambitious son, whose claims to leadership had been ignored by his father, and partly the story of the evolution of modern Japan. However, Mr. Kurosawa allows no one of these stories to dominate. Kagemusha, though so elegantly directed that even perfunctory shots (say, the arrival of a messenger) seem integral to the film's ritual, has no more narrative drive than an entry in an encyclopedia.

Indeed, the first fifteen minutes of the film contain so much exposition about who is doing what to whom that the average moviegoer may well despair. And because the dying Shingen has a younger brother who has also impersonated him, a good hour may pass before one is absolutely certain which of the three look-alikes is on the screen. The movie frequently cuts away to scenes in the enemy camps, but if you're following the subtitles, you may not always know where you are.

About halfway through Kagemusha it becomes apparent that the specific details are less important than the overall panorama, the accumulation of scenes of court politics, of Kagemusha growing into his role, and of furious, life-and-death battles, all of which are observed as if from another planet.

The great battle that concludes the film is one of the strangest I've ever seen on the screen, if only because none of the major characters is more than an observer to the battle that will determine his fate. Kagemusha, once again an outcast, dressed in rags, watches the battle from the station of someone not allowed into the club. Even Shingen's son, now in command, observes the carnage from a safe distance, according to custom, sitting on a camp chair. What we see is not a battle that holds us in suspense, but the progress of something over which we have no control, like someone else's revolution.

In Kagemusha Mr. Kurosawa contemplates tumult in brilliant individual images of battle, of bodies falling, of great bands of nameless men advancing to their deaths. When, at the end, the camera pans across the quiet battlefield, we see the occasional figure of a dying soldier or a horse attempting to stand, only to fall back, collapsed, finished and forgotten. What one carries away from this film is not any prettified idea of the dignity of man but of man in impotent relation to historical forces over which he has little if any control. There is beauty in Kagemusha but it is impersonal, distant, and ghostly. The old master has never been more rigorous.