With Charlie Kaufman in Person! 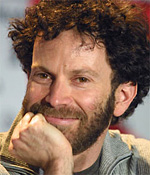 Charlie Kaufman (Eternal Sunshine of the Spotless Mind, Being John Malkovich, Adaptation) wrote the screenplay and makes his directorial debut with Synecdoche, New York, a story about Caden Cotard, a theater director (Philip Seymour Hoffman) from Schenectady who sets out to make his mark by staging an ambitious Manhattan production that involves creating a life-sized and self-referential replica of a part of New York City inside an airplane hangar. Mysterious illnesses and troubles with the women in his life underscore his sense of urgency and decline. When Cotard assembles his cast and attempts to direct them within his created city, the actors and the characters, and reality and fantasy, become increasingly difficult to distinguish from one another. Also stars Catherine Keener, Hope Davis, Emily Watson, Dianne Wiest, Jennifer Jason Leigh, Michelle Williams, Samantha Morton, and Tom Noonan.

Synecdoche : n. A figure of speech in which a part is used for the whole (as hand for sailor), the whole for a part (as the law for police officer), the specific for the general (as cutthroat for assassin), the general for the specific (as thief for pickpocket), or the material for the thing made from it (as steel for sword). -- American Heritage Dictionary

The directorial debut of screenwriter Charlie Kaufman (Eternal Sunshine of the Spotless Mind, Adaptation), Synecdoche, New York is a sprawling, messy work of inspired brilliance and real humanity, a film that enthralls and affects even as it infuriates and confounds. Kaufman gives us parts, and the whole; he gives us the general and the specific. The plot is, on the surface, about a theater director, Caden (Phillip Seymour Hoffman), whose work, and life, in upstate New York have both fallen into a state of stasis relieved only by hints of slow decay. His marriage to Adele (Catherine Keener) is a qualified success: somewhat supportive, somewhat loving, somewhat successful, sustained in part by their daughter Olive (Sadie Goldstein). And just as Caden's life falls apart personally -- Adele, a painter, takes Olive to Berlin for a gallery showing and never comes back -- he also earns a "Genius" grant, and embarks on an ambitious, immersive theater piece that'll be his masterwork.

But that meat-and-potatoes synopsis does not, and can not, fully explain what Kaufman covers and examines and explores and offers in the film -- partially because of the fluidity of time and space and art and reality in the story, and partially because of how Kaufman wedges every frame full of set design, side notes, visual tricks, subtext, deadpan jokes, prosthetic makeup, voice-over, post-modern inventions and old-fashioned melodrama. Synecdoche, New York veers away from reality fairly early in its journey; indeed, there's a question of if it even starts anywhere near there to begin with. Caden's obsessed with the decline of his physical body as he ages, poking at bumps, examining anomalies, concerned with disease.

His theatrical project finds a home in a huge abandoned hangar, which he fills with a recreation of the city around it, which, in the illogical logic of a Charlie Kaufman screenplay, involves re-creating a hanger within the hanger containing another iteration of the play, and then, of course, recreating the hangar (and his play) inside the hanger within the hanger. The attempt to evoke the world through art just makes a smaller version of the world, over and over again. (It's too bad that the visual and philosophical appeal of this idea is undermined by how Kaufman's occasional collaborator Michel Gondry took on the same recursive, reductive idea in briefer and better fashion with the video for Bjork's 1997 single "Bachelorette"; it would be interesting to know if Kaufman was inspired by Gondry, or vice-versa, or not at all.)

And we also see Caden's dealings with the women in his life -- his wife, his box-office manager (Samantha Morton), his leading lady (Michelle Williams), his daughter, his therapist (Hope Davis, brittle and bizarre) and Ellen (Dianne Wiest), who takes on his role as he ages and falters in the eternal rehearsals and workshopping of the hangar-play that consume years of his life. We also see Hoffman deal with the actor, Sammy (Tom Noonan), who takes on the role of Caden within the hangar, and offers Caden a distorted reflection of himself. Is Sammy's brusque, brooding behavior an inaccurate portrait of Caden, or too close for comfort? Synecdoche, New York leaps from topic to topic, year to year, loaded with possible parallels. There are some dreams where we awake perfectly clear as to how the pieces and parts of our nighttime vision matches up to our waking life, and there are other dreams where we simply blink, and dismiss them as nothing but crazy talk; Synecdoche, New York is more like the latter kind of dream, and that hurts the film. Its ideas are so fecund and fertile and promiscuously perverse that we're often left with a movie too slippery to grasp with the mind and too clever to claim with the heart.

But Hoffman keeps the film from failing to reach us; he makes Caden a slumped, sympathetic everyman, terrified of death and failure and living and success. Even as Kaufman's ideas spiral ever outward and the intricate production design becomes dizzying and overwhelming, we keep coming back to Hoffman's performance. He provides a center to the movie's manic inventions and bizarre digressions, and he makes Caden more than just the focal point of Kaufman's wonders and madness.

Much like the Toronto International Film Festival debut of I'm Not There, the Cannes premiere of Synecdoche, New York offers an international stage for the unveiling of a unique vision; even more than in I'm Not There, there's the legitimate question of if Kaufman's film represents a unique vision that can explain itself to a larger audience. There are so many things going on in Synecdoche, New York -- deadpan jokes and weird set design, perverse reversals and leaps in time, the strong possibility that our protagonist may not be living these events but dreaming them, or may not even be real, or alive -- that one can feel curiously challenged to actually care. Synecdoche, New York is the kind of movie that inspires more intellectual comparisons -- It's 8 ½ for our modern age! It's a post-Woody Woody Allen film! It's Jacob's Ladder for New Yorker subscribers! -- than emotional responses.

Synecdoche, New York, might be easier to analyze than enjoy, easier to think about than feel. And yet, as Caden makes mistakes, frets about growing old, laments losing touch with his daughter and tries to find some happiness, we do care about him; that may be more a tribute to Hoffman's work than Kaufman's. Synecdoche, New York is bolder and bigger and weirder than the movies that sprang from Kaufman's scripts for Spike Jonze (Being John Malcovich, Adaptation) and Michel Gondry (Human Nature, Eternal Sunshine of the Spotless Mind); it's also colder and crueler than those films. Plenty of people were used and quizzical after this morning's press screening of Synecdoche, New York; over time, though, I think Kaufman's directorial debut is going to inspire more puzzlement than passion.