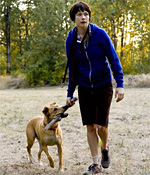 An all-but-penniless young woman is on her way to Alaska to make a new life for herself, but when her car breaks down and she loses her dog, her uncertain future looms large.