Not Quite Hollywood: The Wild, Untold Story of Ozploitation! 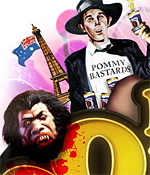 This fast-paced, hilarious doc argues that American exploitation films of the 1970s and 1980s had nothing on their Australian counterparts - which boasted double the gore, triple the sex, and 100 times the fetishistic car chases.

Not Quite Hollywood: The Wild, Untold Story of Ozploitation!