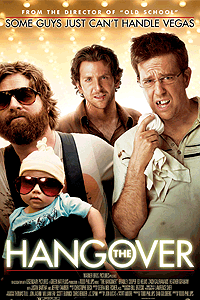 Not only was THE HANGOVER one of the big surprise hits of the summer, it has now entered the history books as one of the top grossing R-rated comedies of all time. And while the tropes for both “the buddy film” and “road-movie” are well-worn, THE HANGOVER exceeds all expectations by eschewing well-known stars and weds together a riotously funny script with a thrill-ride of memory reconstruction the likes of which has not been seen since MEMENTO. We are very proud to announce that the co-writer for this finely crafted film is one of our own; a C.U. alumni with fond memories of the film classes he took while a student here. When Scott Moore contacted us to generously offer his services, we jumped at the chance. This is sure to be a very entertaining and lively Q&A.

Las Vegas is known for many things: the casinos, quick weddings, strippers, bachelor parties and Wayne Newton. What happens when you add all those elements into one film? You get one hell of a comedy. Directed by Todd Phillips and starring Bradley Cooper, Ed Helms, Zach Galifianakis, Justin Bartha, and Heather Graham, 'The Hangover' is an outrageous, entertaining, laugh-out-loud classic from beginning to end.

This is not your ordinary road trip guy film. Phil (Cooper), Stu (Helms) and Alan (Galifianakis) are prepared to take Doug (Bartha) to Las Vegas for his bachelor party and to give him the best time of his life. While Phil is comfortable leaving the wife and kid home, Stu has to lie to his controlling girlfriend as to the whereabouts of his trip; opting to tell her he's headed to Napa Valley for a dentists' conference. When the guys get to the land of no boundaries, and have a drink from bottle that Alan brought, their lives are never the same.

The next morning, none of them can remember what happened and Doug seems to be missing. There's also a ferocious tiger in the bathroom, an unidentified baby in their hotel room and a naked Asian man locked in the back of a Mercedes. Meanwhile, hours are going by as the wedding is approaching.

Phillips, who previously helmed the comedies 'Road Trip' and 'Old School,' certainly has gone a notch above with his latest comedy. The story never runs out of steam. It's hard to keep jokes coming, but each of the actors made them stick, from Cooper's coolness to Galifianakis's comic timing. The cast even managed to get boxing legend Mike Tyson in on the joke. By the time the end credits get rolling, you will be pulling out that second box of tissues to dry your eyes from all those tears of laughter.