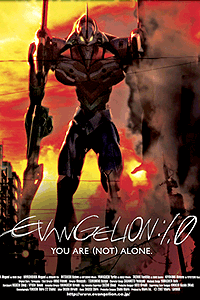 Action-packed and swelling with religious and philosophical musings, this first chapter in a planned trilogy about a teenage boy chosen to save a future world from alien invaders has powered its way to $14 million domestically since Sept. 1. Niche offshore play in selected markets is possible, and a worldwide DVD bonanza seems assured.

It gets underway with 14-year-old boy Shinji arriving in Tokyo-3, a heavily fortified outpost that's survived "Second Impact," a calamity leaving humankind vulnerable to alien machines referred to as Angels. Last hope for survival rests with government agency NERV (whose motto reads, "God is in his heaven, all is right with the world") and its gigantic Evangelion fighting artillery, a human-mechanical hybrid designed by Shinji's distant father, Gendou.

Challenging the unconverted with thinly sketched details of just who or what the Angels are and how the Evangelions came to be, the story is better served by the emotional dynamic of shy boy Shinji seeking parental approval. A lonely figure ignored by his father and bullied at school, the lad has the chance to prove himself when it appears he's been selected by some sort of divine guidance to pilot an Evangelion into battle.

Joined at the controls by similarly chosen teenage girl Rei, the narrative assumes an even deeper religious tone when its revealed Shinji's main task is to protect Lilith, a messiah-like being whose survival is connected to the prolongation of human life and Evangelion production.

Matters may be murky, plot-wise, but the machinery and pyrotechnics do not disappoint. Hulking human-dimensioned modules with design pointing the way to prophesied amalgamations of flesh and circuitry, the Evangelions rank in the top bracket of contraptions dreamt up by Japanese animators.

Battle scenes deliver everything required, and imaginative touches include the sight of Tokyo-3 retreating from the Earth's surface when danger approaches.