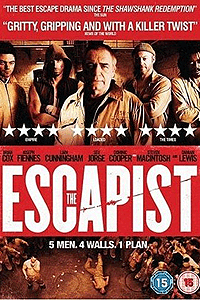 Without straying too far from formula or stock characters, "The Escapist" shapes a standard prison-break drama into a metaphysical study of freedom and reparation.

Set in a grim London institution (played to perfection by Kilmainham Jail in Ireland), the movie centers on Frank (Brian Cox), an aging lifer with a perilously drug-addicted daughter. Circling Frank are the usual suspects -- the vulnerable new cellmate (Dominic Cooper), the resident psychopath (Steven Mackintosh), the ruthless king con (Damian Lewis) -- but the stereotypes are beside the point: "The Escapist" has loftier goals than simply getting its characters from pokey to pavement.

Structuring the escape and its planning as parallel story lines, the director, Rupert Wyatt (who also wrote the script with Daniel Hardy), keeps faces close and words to a minimum. Drama, and the cadences of prison life, are asserted by an urgent, discordant score (by Benjamin Wallfisch) whose naturalistic taps and groans reduce the need for visible brutality. The hissing of water during a shower rape is as agitating as any choreographed image of sexual assault.

Filming the prison like a decaying museum, the cinematographer, Philipp Blaubach, conjures mystery from soaring iron stairways and a vaulted, light-spilling ceiling. Not until the film's final moments does the need for that mystery become clear.