An important doc that carries the spirit of drastic urgency 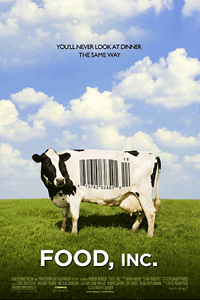 I was warned not to eat before seeing Food, Inc., a mind-boggling, heart-rending, stomach-churning expose on the food industry. Unfortunately, no one told me I might never want to ingest anything ever again.

"The industry doesn't want you to know the truth about what you're eating -- because if you knew, you might not want to eat it." So says Eric Schlosser, author of Fast Food Nation: The Dark Side of the All-American Meal (loosely adapted as drama in 2006) and one of the film's two principal talking heads. The other is Michael Pollan, who wrote The Omnivore's Dilemma and offers his own dark views on the business of American food production and the contents of American stomachs.

Directed and co-produced by the Emmy-winning Robert Kenner (PBS's Two Days in October), Food, Inc.begins in the grocery aisles and tracks back to the seeds and slaughterhouses that produce, in large part, what we eat. In the process, it throws out one zinger after another, making its case with the methodical and unremitting force of muckrakers trying to radicalize -- or at least rouse -- a dozing populace.

We learn, for instance, that the country's top four meatpackers control 80 percent of the beef market. We hear that farmers are subsidized to over-produce corn, which then goes into Coke, Sweet & Low, diapers, Motrin and cattle feed. We're told that the gut of a cow fed on corn breeds the deadliest strains of E.coli; that the Monsanto Company owns every last one of its genetically engineered soybean seeds; that the Smithfield Hog Processing Plant in North Carolina slaughters 32,000 pigs per day. Fifty years ago, we're advised, it took 70 days to raise a chicken to slaughter. Today it takes 48.

Grim statistics pair off with arresting visuals: a researcher with his hand inside a cow's stomach; conveyor belts full of little yellow chicks, manhandled like car parts; a cow, not quite dead, getting pushed around by a forklift. There's also video of squealing pigs herded to their death on the "kill floor" of Smithfield, where, a union organizer says, the company recruits cheap workers from Mexico who often wind up arrested by immigration agents.

The toughest footage of all shows Kevin Kowalcyk, a bright-eyed 2-year-old splashing in a lake. He later died after eating burgers contaminated with E. coli O157:H7, prompting his mother to campaign for a law that would strengthen the U.S.D.A.'s power to enforce sanitation and safety standards. But she won't say a word about her eating preferences -- no Oprah-like rant against ground beef -- for fear of being sued.

Food, Inc.is almost entirely one-sided, but not for lack of trying. Officials at Monsanto, Smithfield, Tyson and Perdue all declined to be interviewed. The film's long list of producers include Schlosser and Participant Media, the company behind An Inconvenient Truth,and it has the same flair for the dramatic and spirit of thorny urgency. It concludes with the same sort of list prodding viewers to act: Buy local, plant gardens, push for change. And know what's in your food before you eat it -- assuming, of course, that you ever lift a fork to your mouth again.