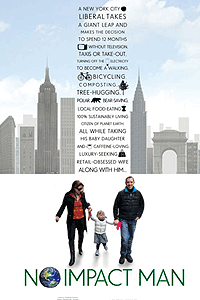 Colin Beavan is a non-fiction writer and blogger from New York City who is noted for recording the attempts of he and his family to live a zero impact lifestyle for one whole year. The goal was to live without many of the common comforts of an American life -- electricity, processed foods, paper products, motorized transportation -- to see how low he could go with his impact on the environment. Joined by his wife Michelle Conlin, a writer for Business Week, and their young daughter, Beavan took to riding his bike, composting his trash and only eating foods grown within a local radius.

An interesting concept for a social experiment (and subsequently, an interesting documentary concept), the story of Beavan and his family is definitely an engaging one. His wife Michelle though, is certainly the most interesting subject of the entire documentary as she struggles with having to give up her consumptive lifestyle. No more expensive handbags, no more riding around in cars and most especially, no more Starbucks coffee. The most engaging part of it all is watching Michelle's struggles with wanting to cheat on the experiment and her ultimate acceptance and lessons learned from the ordeal.

Directors Laura Gabbert and Justin Schein, neither of whom are strangers to making solid docs, do a good job of capturing the more engaging moments from a year's worth of experience. Getting in the way is the focus on the countless media appearances that cause a rash of criticism about the integrity of the project. Is Beavan's work hypocritical or visionary? Is he self-promoting or is he making an earnest attempt to help people see the ways that we can all minimize our impact on the environment? The answers to these questions seem to be left on the table as the documentary roles to a close, leaving us to formulate our own answers. Either way, we cannot deny that the doc itself is a very intimate and engaging look at some of those 'changes' we often talk about, but never muster the courage to enact in our own lives. If anything, No Impact Man is an effective, though extreme, example of what it really means to be conscious of our environment.