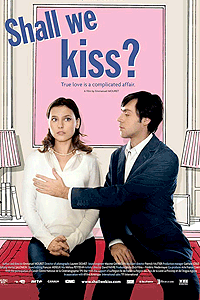 After seeing Shall We Kiss, the wistful new sex comedy from Emmanuel Mouret, you may never be able to think of the French and sex in quite the same way again. Oh la la! It's a couple of stories within a story, and all the stories are about sex, but in such modest, hesitant ways you just want to chuck them under the chin and say there, there.

The framing device introduces us to Emilie (Julie Gayet) and Gabriel (Michael Cohen), and them to each other. She's in Nantes on a buying trip. He gives her a ride, and later buys her dinner. The chemistry is palpable, but it turns out they are both "with someone", so when he moves to end the evening with a kiss, she demurs.

Ah, but there is no such thing as no consequences. Emilie knows a couple in Paris who thought they could have it that way. She's reluctant to tell Gabriel the story. "It's too personal," she explains, even though it's not about her. But he begs to hear it, probably on the theory that if you can keep the girl talking late enough into the night, good things are bound to happen.

And so we enter the world of flashback as Emilie tells her tale. And don't believe her about making a long story short.

Her friend Judith (Virginie Ledoyen) is happily married to Claudio (Stefano Accorsi.) Nicolas (Mouret, the director) has been her best friend since childhood. They've always confided in each other about everything, including their love lives. But when Nicolas breaks up with his girlfriend, he finds himself in a crisis, and comes to Judith for help.

Once Judith gets his drift, she suggests a prostitute. He's tried that, he admits; but it didn't work. She wouldn't kiss, and sex is nothing without kissing. Nicolas has another solution in mind. Seeing as how Judith is such an old friend, would she be willing? Just to remove the splinter?

She would. As a friendly gesture. Of no consequence.

Their entente cordiale is the comic set piece of the movie, a painfully polite pas de deux where each step ("Shall we undress?") is discussed, and permission ("May I touch your right breast?") is sought and granted at every turn. It's all very mannered and sweet, funny but not hilarious. Sex without kissing may be unsatisfying, but so, one might think, is sex without passion.

Not so. Far from relieving the itch, their hesitant coupling inflames it. They decide they'd better keep trying, hoping to break the spell. But the spell grows stronger. What to do?

Suffice it to say, things grow more complicated. We get a little side story from Gabriel about his girlfriend and their circumstances, but the main event revolves around Emilie's tale of Judith and Nicolas, and Claudio, and Nicolas's new girlfriend Caline (FrÈdÈrique Bel). And it turns out there are consequences.

Mouret is the cinematic offspring of Woody Allen and Eric Rohmer. From the former he takes the actor-director presenting himself as neurotic but satisfying lover; from the latter he absorbs the pleasure of extended talk. Mouret's talk is enjoyable, but it doesn't quite rise to the level of intelligent hunger with which Rohmer chewed at the marrow of his bones of philosophical seeking.

Mourt makes effective use of music, swelling the soundtrack with the throbbing romanticism of Tchaikovsky and Schubert as the figures on screen go through their awkward sexual and romantic fumblings, while oversized poster portraits of the Romantics observe the human comedy from the walls.

The lovers are all lovely, with the exception of Mouret, who might be better served staying behind the camera. Ledoyen in particular is enchanting, and Gayet brings a very kissable coolness that is reminiscent of the young Catherine Deneuve.

In the end, we return again to the couple in Nantes, with the title question still hanging in the air. Through the story's evolving complications, the point is made: love is an explosive device, and we tinker with it at our peril. It may be that problems and mistakes and heartbreak are inevitable under the best of circumstances, but they are virtually guaranteed if we have the hubris to think we can open the door a crack and let in just a little of the whirlwind.