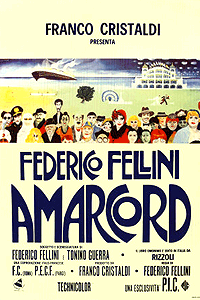 Like La Dolce Vita, Federico Fellini's Amarcord, one of his three or four masterworks, is at once a very personal film and a more detached socio-political scrutinization of Italian society. The film is rich enough to suggest different reading and meanings. On one level, it a bittersweet celebration of Fellini's youth in Rimini, and on another, a cautionary tale about the social conditions which gave rise to Fascism. Fellini intended the film to depict the social, cultural, and political isolation from the rest of the world that Italians experienced under Mussolini. Fellini hoped that Amarcord "might stimulate reflection on the gradual extinction of so many simple and less simple pleasures," which fascism ultimately causes. Amarcord is about, in Fellini's own words, the "psychological, emotional manner of being a fascist." For Fellini, this psychological state entails a sort of "blockage, an arrested development during the phase of adolescence... living with the comforting sensation that there is someone who thinks for you (one time it's mother, then father, then the mayor, another time Il Duce, the Madonna, the bishop) and in the meantime you have this limited, time-wasting freedom which permits you to cultivate only absurd dreams... " Amarcord was a popular and critical success at home in Italy, as well as internationally. It opened the 1974 Cannes Film Festival and won the Oscar for Best Foreign Film. The New Yorker commented that, "After a decade or so of being `out,' Fellini is `in' again." Fellini was born to a farming and trading family in the coastal town of Rimini in 1920. As a young man, he wound up in Rome and tried to become a journalist. Fellini began his film career in the Italian neo-realist movement, which started at the end of World War II. He collaborated with Roberto Rossellini on the screenplays for Open City (1946) and Paisan (1946). Eventually, Fellini was to become the best-known Italian filmmaker outside of the country. — E.Levy,EmanuelLevy.Com