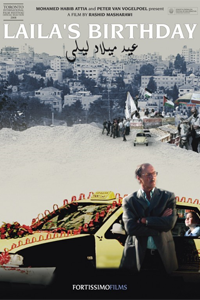 NOTE: This film shows in the Film Studies Theater in ATLAS 102

Toward the end of Palestinian filmmaker Rashid Masharawi's tragicomedy about daily life in his West Bank hometown, the frustrated protagonist shakes his fists at the heavens and blames the 60-year Israeli occupation for his woes. That's the only direct polemic in Laila's Birthday, and this beguiling second feature, after the respectfully received Ticket to Jerusalem, is all the better for keeping its head close to the ground of the surreal business of getting through the day in Ramallah. Veteran Israeli-Arab actor Mohammed Bakri (whose son, Saleh, played the hunky young Chet Baker fan in The Band's Visit and has a small, but significant, role here) plays Abu Laila, an unemployed judge eking out a living as a taxi driver, who heads out to work at the beginning of the film, charged with bringing home a gift and a cake for his little girl's birthday. Prickly, unbending, and a rigid follower of rules, Abu Laila is hopelessly ill-equipped for the bedlam of a city plagued by corruption, inefficiency, and the occasional missile from across the border. Part Tati, part Chaplin, part absurdist satire in the manner of Palestinian director Elia Suleiman (Chronicle of a Disappearance), Laila's Birthday is beautifully shot and overlaid with a spare, lyrical score that lends rueful emphasis to Masharawi's exasperated fidelity to a chronically malfunctioning city.