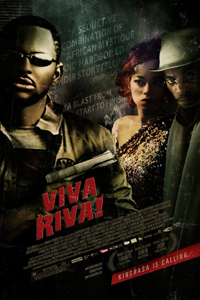 Life is cheap in Kinshasa, the capital of the Democratic Republic of Congo. It's gasoline that's expensive, when you can get it, and the price is going up.

Enter Riva (Patsha Bay), back home after 10 years away in neighbouring Angola, with a whole truckload of fuel stolen from his boss, Cesar, who is in hot pursuit with a couple of heavies in tow.

Cesar blackmails a lesbian army commander -- using her sister's well-being as his bargaining tool -- to track down Riva. She enlists the aid of Rosie, a bisexual prostitute, to do some sleuthing.

If that's not enough danger for one man, Riva's heart is set aflame when he lays eyes on the sultry Nora and nothing can dissuade the cocky charmer from pursuing her, even the knowledge that she's the property of local hood Azor, who also has some big bad muscle to do his bidding.

Munga, who studied filmmaking in Belgium, has clearly been influenced by the likes of American auteur Quentin Tarantino -- think Jackie Brown -- and British director Guy Ritchie -- think Snatch, not (shudder) RocknRolla. A plethora of idiosyncratic, venal characters -- including a shady priest -- all looking to score or to settle scores in a chaotic, hardscrabble town and the chase is on.

But Munga is not merely an imitator. In additional to creating memorable characters, he's got a knack for great dialogue (spoken in French and the local Lingala language) and knows how to keep the action moving fast.

He's also a fearless realist, unafraid to show a woman urinating behind an outbuilding or to have his characters use outrageous racist and sexist language and to portray brutality in ways that other filmmakers (though not Tarantino) might shy away from. Not to mention portraying a strong, sympathetic lesbian character in a country that is generations behind the West in its acceptance of alternative forms of sexual expression.

That's part of the wonder of Viva Riva! It feels so raw and urgent and real.

But Munga also invests his film with a moral core. Amidst the action -- the lies, double-crosses and violence -- he also portrays scenes of people in the city, crumbling and beset with regular power outages, who anonymously toil away in hopes of a better life.

You can also bet that most of the players are going to get their bloody comeuppance and that only a very few are going to come through unscathed.

The film has little polish in terms of production values. But the performers all acquit themselves well, especially Manie Malone as the siren, Nora, whose diamond-hard heart conceals unexpected vulnerability.

African filmmakers of future generations will one day recognize the debt they owe to both the film and its creator. Viva Munga!