Scheherazade Tell Me a Story 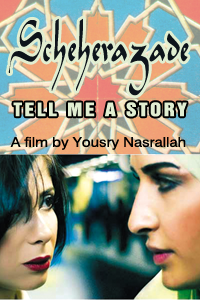 Legendary and modern struggles are braided together in director Yousry Nasrallah's Scheherazade, Tell Me a Story, which playfully yet bitingly evokes the titular Arabian Nights fabulist in contemporary Egypt. Hebba (Mona Zakki) is the ancient storyteller's modern-day surrogate, a sharp, stylish Cairo TV hostess whose criticism of administrative corruption clashes with her ambitious husband Karim's (Hassan El Raddad) own interests in a government-run newspaper. Reluctantly, she turns her attention to the supposedly de-politicized subject of female romance, bringing guests onstage to regale audiences with accounts of amorous woe.

Of course, as Karim himself later admits, no subject can avoid being political, and the women's stories are swiftly revealed to be not docile crowd-pleasers, but ardent narratives of sexual oppression. There's Amany (Sawsan Badr), whose intense search for love and rejection of marital obligations result in her defiantly hanging on to her virginity into late middle-age; Safaa (Rihab El Gamal), a shy ex-convict with a story of desire, vengeance and sisterly sacrifice; and wealthy dentist Nahed (Sanaa Akroud), whose dreams of traditional marriage segue into domestic blackmail and sidewalk protests.

Just as the act of spinning tales was to Scheherazade a (literal) means of survival that grew into a creative form of resistance, to Nasrallah's heroines it is a medium of commoditized amusement which gradually becomes a platform for awareness of society and self. (A fierce sense of spiritual commiseration emerges in these talk-show testimonies, as Hebba and her guests are framed before giant monitors and the heightened video images evocatively suggest one conscience connecting to another.)

Contrasting working-class villages with affluent corporate surroundings, Nasrallah vibrantly embraces the stylistic tropes of woman-centered melodrama in a forceful and often piquantly witty study of how gender subjugation can extend from household to the media and politics. Inescapably and poignantly colored by the revolutionary events that would take place in Egypt in the years since its making, Scheherazade brims with faith in storytelling as art's great way of lifting society's veils.

Scheherazade Tell Me a Story