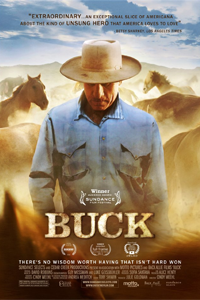 Child abuse seems to be passed from one generation to the next, so when we're confronted with an exception to the rule, it's worth trying to figure out what turned the tide. You can think about such matters while watching Buck, an inspiring documentary about a cowboy who employs a kinder, gentler way of training horses.

Buck Brannaman, a 49-year-old trainer who advised Robert Redford during the filming of The Horse Whisperer and who conducts horse-training clinics throughout the country, was abused as a child. Buck's dad turned his sons (Buck has an older brother) into trick ropers; they were cute and good, but that didn't stop their father from beating them senseless.

Despite his troubled upbringing, Buck avoided repeating the sins of his father. I think that's because a high school coach and a local sheriff intervened: Buck and his brother were placed on a sprawling Montana ranch. There, Buck became part of a large foster family headed by Forest and Betsy Shirley. Forrest, a strong father figure, kept his charges busy. Betsy, a woman of irrepressible spirit, filled the mother role. Buck, whose own mother died when he was 11, still refers to Betsy as his mom.

Buck is married and has two daughters, but remains a bit of a loner, traveling the country to conduct training sessions. His methods -- based on trying to identify with and understand an animal's fear -- have enabled him to work with both horses and owners, and to hear Buck tell it, his human trainees can be at least as difficult as his four-legged students.

First-time director Cindy Meehl follows Buck through a variety of workshops, shows us how he trains horses, and allows him tell his story in a slow, relaxed way that's completely engaging.

Buck is exceptionally good at what he does, but he can't always work miracles. In the film's most heartbreaking segment, he's unable to school a horse whose predatory impulses can't be curbed. He also makes clear that the horse's owner (not the horse) is responsible for the fact that the horse must be put down.

Buck leaves us wondering what happened to Buck's older brother, but a couple of loose ends can't negate what Meehl's beautifully shot documentary accomplishes: It tells a strong and involving story about a man who seems totally inseparable from what he does.