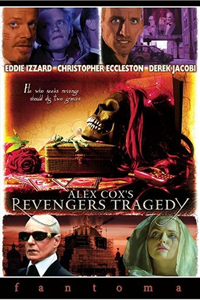 The truly subversive and rebellious English director Alex Cox has taken on a film similar to Baz Luhrmann's Romeo & Juliet and Julie Taymor's Titus. But he hasn't adapted a Shakespeare play. Instead he has chosen a 17th century play by Thomas Middleton that, according to the director, "was said by some to be the vilest piece of work in the English language, the product of a diseased mind."

This only makes sense. Shakespeare would be too ordinary, too snooty for Cox, whose works include the cult classics Repo Man and Sid and Nancy as well as other bizarre films like Straight to Hell, Walker and Highway Patrolman.

Christopher Eccleston (28 Days Later) stars as Vindici, a man whose wife was brutally murdered years earlier by the Duke (Derek Jacobi). Vindici rounds up his brother and sister and plots his revenge. He begins by befriending the Duke's eldest son and heir, Lussurioso (Eddie Izzard) and by playing Lussurioso's four brothers and mother one against the other.

Cox updates the action to the near future in which everyone dresses like punks; tattoos, piercings and face paint are the norm. The Duke himself walks around with dark blue lipstick and ever-present sunglasses. Cox echoes these dazzling colors with his cinematography, set design and editing. A superb score (by the band Chumbawumba) gives the movie a little breathing room as well as a layer of cool.

Sometimes the film is hard to follow and can get a bit off-putting (the English subtitles help). But then you consider the man behind it all. I found myself flashing back to the many times I've seen Repo Man and Sid and Nancy and how purely funny those films were, and then it hits you: Revengers Tragedy is really a comedy. When the Duke tells Vindici that he once killed a girl who failed to please him, then pleasured himself with her corpse, or when one of the brothers sleeps with his own mother, Cox is laughing and enjoying all the twisted ridiculousness of it all.