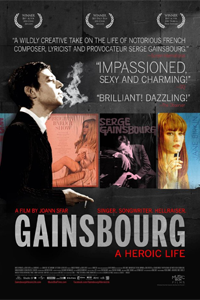 Once upon a time, a young boy, Lucien, walked up and down the streets of Paris, proudly showing off the abominable yellow star pinned to his jacket.

It's 1941. When this child of Russian-Jewish parents with a cheeky sparkle in his eyes crosses paths with the pro-Nazi French militia, he starts singing The Marseillaise anthemalongside them... even though he doesn‘t quite know the words.

Then something stops young Lucien short – anti-Semitic propaganda featuring a caricature of a Jew. It's an ugly face that resembles him a bit too closely. A face pinned up to be seen and scorned by all.

He wants to run away or erase the grotesque face but does neither. The caricature suddenly comes to life, pops out of the wall and starts to follow the boy. From that point on, the ugly face will never leave his side. It will be his shadow, his curse, his inspiration, his only companion, his alter ego.

Though he doesn't know it yet, little Lucien will one day be known as Serge Gainsbourg.

This tale recounts the life of a hero. It's about a young boy who goes around occupied Paris spouting out words as though he were putting flowers in a gun barrel. Forty years later, he provokes a major upheaval at a concert in Strasbourg where he is supposed to sing a Jamaican reggae version of The Marseillaise. The concert hall is sacked by the military, and the black musicians don't even dare to come on stage. Gainsbourg became a true legend by winning over France with his subversive wit.

It's a tale of conquest. A passionate lover despite his awkward face, Gainsbourg lures the mythic Brigitte Bardot into his bed. He seduces Jane Birkin while taking a swim in his French flag underpants and convinces Juliette Greco to waltz with him barefoot in the wee hours of the morning. These legendary women all, without exception, sing the poetic insanities he writes for them.

It's a tale of duels. The most deadly of them pitting Gainsbourg against his alter ego, Ugly Face, a bony, feline man/marionette who jealously watches over his love affairs and reminds him of his repressed humiliations whenever he is at the brink of happiness. Ugly Face is a cunning jester, always present to help and hinder the creative process, haunting the poet/singer's nights and never granting him peace of mind.

It's a tale in which Gainsbourg evolves from being a starving painter to the master of the French pop song. His music grabs the narrative reins, transforming a plump wife into a Hippopodame (a lady hippopotamus) and an adulterous and passionate evening into a worldwide hit, Je t'aime, moi non plus (I love you, neither do I). And so to tell the story of this master of provocation, this manipulator of words and women, of this shy but avid adventurer, let's swap straight talk for wild rhymes and prepare to dive into the Paris of the swinging sixties to take part in a story as audacious as the risks that made little Lucien... Serge Gainsbourg.