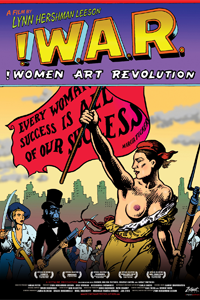 Artist and filmmaker Lynn Hershman-Leeson has a few more detractors than fans, but there's no denying her work earns its space and its echo in the chambers of history. Her newest, the most straightforward documentary of hers I've seen, is a sentient survey of Feminist Art beginning in 1968 and ending untidily today, at which point she tells us she's been trying to make this film for 40 years and could only stop once she believed she had a good ending. A good ending for the struggle of women artists is recognition, a gift provided by WAR itself; though we have films about artist impresarias like Carolee Shneemann and books on Louise Bourgeois and Marina Abramovic, Hershman-Leeson still makes the point that if you stand outside any major museum and ask people to name three female artists, they can come up with Frieda Kahlo and five minutes of anxious silence. Women Art Revolution (aka WAR) is a staunch declaration of identification and reverence, this movie embodies the statements of curator Marcia Tucker (first woman curator for the Whitney and founder of the New Museum for women's art in 2006). "A success for one woman is a success for all women." This doc is not likely to make much of a dent at the box office, sadly, but it will live long and hard in universities and will probably enjoy the sort of re-purchasing experienced by education staples like Un Chien Andalou. It warrants that kind of replay.

For as harmonious and welcoming as Ms. Tucker's statement sounds, the reality of the women's art movement was that it began as the disparate emergence of female artists and then morphed into a movement of women who fought against the marginalizing curatorial boards of the major museums. Once the groups seemed to coalesce, they quickly factionalized. The West Coast seemed more aggressively oppositional than their East Coast counterparts, in fact, the Angelinos sounded a bit like entitled rock stars. And entitlement does seem like an issue with the personalities at play. (The one thing that Hershman-Leeson doesn't wrestle is the fact these unsung geniuses often came from bourgeoisie roots and it was fairly central to most of their activism to be contrary to the bourgeois art establishment.)

Cognitive dissonance comes in many forms here. In an interview in 1990, Sheila Levant de Breitteville sounds enmeshed and strong about the gallery she founded with other female artists, but captured again in 2006 she expresses her sadness over how the LA leg of the movement handled their poverty: "we used it wrong, there wasn't enough identification with others like us," suggesting that for as progressive and anti-bourgeois as these artists were, they couldn't stop seeing the world through the lens of their piggybank.

Considering the conundrum modern women artists face when understanding feminism, Hershman-Leeson interviews four new female artists (Miranda July among them) who resoundingly confirm that unknown history is doomed to repeat itself. One realizes she's "making the work of the 70s," another directly states her generation is challenged to look onto the work of the feminists. It's really true. First wave feminism often looks essential but the more intellectual waves can look comparatively frivolous and militant about cosmetic limitations--admittedly, these things only can look unessential because of the liberties we enjoy today. At the risk of making a silly comparison, the secretaries of Mad Men are women hamstrung by circumstance and capable of greater (but more concealed) maneuvers than the men whose job it is to oppress them in the name of keeping order. It's only logical our points of comparison are representational. From many angles, the feminist art movement wasn't successful because it wasn't sufficiently represented in art or history books, which justifies both our lack of knowledge about it and the sense that women have to move away from the feminist banner to evade association with obscurity or even failure. (Everything here suggests press is proof of life.)

The early waves of feminist art, as depicted here, were accompanied by gritty and utilitarian activism; naturally that aesthetic looked revolutionary coming from members of the "softer sex." And for however authentic that forceful uprising was, by 1985 a trend that shouted the same "why aren't we in museums?" slogans emerged but with a sense of humor and a media savvy. The Guerrilla Girls, founded by four artists in gorilla masks, transformed all the extensively unpretty women's activism into radical politics in the form of commercial art. Their "posters" were often hilarious. Naturally this progression seems to play at a theme: just as the regular toggling between the artist interviews in different timeframes develops a theme of progress in time, the slow beautification of feminist art and activism seems to suggest, not a commercialization, but an acceptance of something. It's also worth noting that the activism didn't often appear as relevant as the art--in this activism and art were separate--and that's a testament to the time and place of the early movement, which doesn't share today's obsessiveness with branding and identity.

It seems as if the great villain in WAR is compromise; even if such a thing is attainable, compromise could still look like the hobgoblin of progress and possibly like a concession no one could afford. Somehow, sweetening the message, murky as such an act may be, is proving the brazen acts of feminist forerunners weren't sacrificial...even remotely.