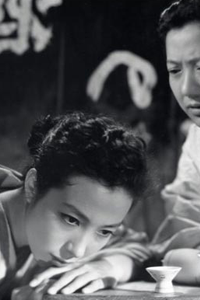 Of special note: on Monday, Sept. 24th, Laurel Rodd, past Director of the Center for Asian Studies and Professor of Japanese, will introduce a representative of the Consulate-General of Japan at the 7pm screening of SUZAKI PARADISE: RED LIGHT. Faye Kleeman, Graduate Director of the Japanese Program in the Department of Asian Languages and Civilizations and a member of the CAS Board, will give a short 5 minute introduction that will put the centenary celebration of the Nikkatsu studios into perspective, and she will also hold a Q&A after the film.

Actress Yukiko Todoroki’s Osami is the moral anchor for the lives that intersect at her tiny bar, and her performance is affecting, but it is Michiyo Aratama as the shiftless Tsutae that is truly compelling in a nuanced and deeply convincing portrayal as the drifter whore burdened by a decency she seeks to escape but always returns to. Her love for a loser is at bottom and all at once a glorious redemption and a prison. She is the new wave – a lost soul of the burgeoning metropolis – a beat.

Kawashima uses brothel jazz on the soundtrack to insinuate this, and places his camera at ground level to look up at his protagonists in a disturbing new way. Aratama has the best line in the film: “You have to live until you die.”