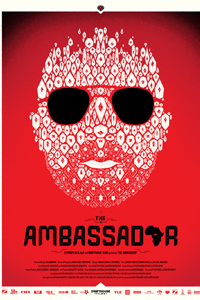 If ever a documentarian had balls of steel and a keen eye for a comic irony it was Mads Brügger.

He deceived the entire North Korean political regime in order to provide a rare look at the crazy mechanics of the locked-down state in The Red Chapel and now he sets his sights on the, arguably, even larger task of exposing corruption and dodgy diplomatic dealings in the Central African Republic.

And when it comes to hiding in plain sight, Brügger does all but attach a neon sign to his head, turning up in the Republic dressed in the style of a 'Great White Hunter' right down to the white suit, riding boots and cigar in a holder. He's certainly hunting big game - corrupt officials and fixers, all of whom seem only too willing to help him get his hands on blood diamonds for the right amount of cash - or at least that's what he thinks, until he begins to get the sneaking suspicion that those he is dealing with are conning him right back.

Describing as "The Ambassador who lights up Africa", he goes through the motions of setting up a match factory - a neat trick that he suggests has been employed by other dirty diplomats who want to smuggle diamonds - all the time trying to get his hands on the dodgy gems and the all-important "diplomtic status" from Liberia that he needs if he is to get them out of the country without being caught. He might not make the matches, but he has certainly created something subversive and incendiary.

The tongue-in-cheek nature of Brügger's set up - which some critics seem to (mistakenly, in my opinion) be taking for mockumentary - only serves to emphasise the farcical and depressing nature of the scams he uncovers.

Everyone wants to get their hands on an "envelope of happiness" filled with cash - although, of course, those on the receiving end use third parties to avoid getting their hands dirty. Meanwhile, Brügger suggests that it's not just the tribal chiefs and corrupt politicians on the ground who are bleeding the country dry, but also the governments of France and China, who want to get their hands on CAR's resources by any means available. And that's before you even come to consider what other reasons people might have for becoming "freelance diplomats".

The film is blessed with the sort of deadpan voice-over humour that Werner Herzog employs so well and a comic sense of the absurd that reaches its climax as we watch two Pygmies' reactions to hearing a tape recording of whale music for the very first time. The only problem is that Brügger's film uncovers corruption of such an unbelievable complexity that it's hard to wrap your head around everything that's happening on a first watch. He also doesn't attempt to offer any solutions - although the dirt is so deep it's hard to imagine an easy clean-up. What he does supply, however, is an eye-opening call-to-arms that suggests that if the West were to set their own house in order it would be much harder for the regimes of these emerging nations to sweep corruption under the carpet.

— A. Wilkinson, Eye for Film