Starship Troopers 2: Hero of the Federation

With director Phil Tippett in person 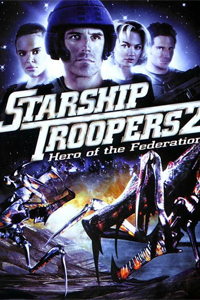 ‘Starship Troopers 2: Hero of the Federation’ is a new straight-to-video sequel directed by special effects man, Phil Tippett (‘Willow, ‘Robocop’ and ‘Starship Troopers’). Scripted by Ed Neumeier, who wrote the first ‘Starship Troopers’ as well as ‘Robocop’, the movie and its no-name cast get off to a slow start before delivering an enjoyable sci-fi/horror hybrid that works well with an obviously smaller budget.

The sequel begins at night on the insect planet as a small group of marines makes a run for an abandoned fort. This opening battle scene is dark and confusing as soldiers in identical uniforms yell and scream as the insectoid army – looking like a giant swarm of angry lobsters – picks them apart. At the fortress, the marines barricade themselves, hoping to call for an evacuation but the communications systems are down. When a trio of strangers arrive at the, the soldiers soon face an entirely different kind of alien threat and the movie shifts into ‘Ten Little Indians’ mode.

For a no-name cast, ‘Starship Troopers 2’ does very well. There isn’t a single miscast lightweight here. The star of the movie is Richard Burgi, a TV veteran (The Sentinel) who’s buff bod and square jaw makes him the spitting image of a GI Joe character. Burgi is Dax, a cynical warrior who has no use for politicians, wimps and officers and who spits venom with lines like “Officers get you killed!”

Kelly Carlson co-stars as a young private who has intermittent psychic powers. (In the first movie, the Federation had an army of psych-corps – people with psychic powers trying to deduce what the bugs were up to.)

If you liked the first movie, ‘Starship Troopers 2’ is a well-done extension of that universe. Smaller scaled, it’s like a whodunit, a horror movie where, like ‘The Thing’, people may not be what they seem. The script is a straight-ahead action movie with none of the political undertones of the first. It lacks the first movie’s grand spaceships and aerial bombardments because the SPFX budget has been devoted to planet-bound bugs. It also lack’s the first movie’s pretty cast which included Casper Van Dien and Denise Richards. Movie buffs may recall the controversy surrounding the first movie because of its violence and equal opportunity nudity. Well, the clothes stay on in this movie though horror movie fans should rejoice because the gore factor is high and there’s plenty of violence.

‘Starship Troopers 2’ demonstrates that Phil Tippett is a competent director who has a clear love for his creatures and special effects. Grosser than a typical SciFi Channel TV movie, ‘Starship Troopers 2’is an entertaining little flick that any B-movie fan would enjoy.

Starship Troopers 2: Hero of the Federation