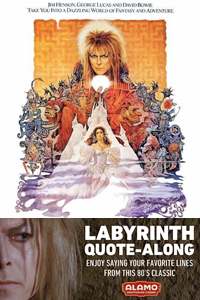 Come on people – do I really need to say anything more than that to convince you that this LABYRINTH SING & QUOTE-ALONG is not to be missed, no matter what the goblins tell you they’re going to do to your little brother? David Bowie, Jim Henson, and Jennifer Connely created an unsurpassed work of young adult cinema in the 1980s, and somehow it’s never been properly celebrated until now. We’ll have subtitles on the screen for all of our favorite lines and every single song, so the whole crowd can yell them all out in unison. We’ll also have an assortment of goodies in your prop bag, including bubbles to transport us to the magical land of Sarah’s dreamy ball, balloons to pop around the theater while we sing the fireys’ song, and best of all – Whoopee Cushions to fart along with the Bog of Eternal Stench. Smells bad!! Suffice to say, if you miss this show, you most definitely have no power over me. YOU HAVE NO POWER OVER ME! (Henri Mazza)