Marina Abramovic: The Artist Is Present 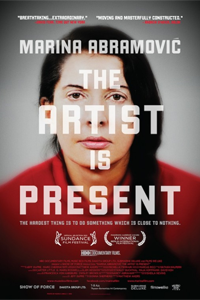 Performance artist Marina Abramovic (see also Abramovic on Artsy) has always been at pains to say that what she does isn’t theater, yet a more flamboyantly theatrical personality would be hard to find. Sixty-five years old, strikingly beautiful, dryly amusing whether posing stark naked or chopping up carrots, she’s a dream subject. This is a person who has so blurred the question of whether she’s “on” or “off” that when she comes down with stomach flu, the camera finds her flat in bed, but wearing full makeup.

Director Matthew Akers structures his documentary around Abramovic’s blockbuster 2010 retrospective at the Museum of Modern Art, which included “The Artist Is Present”: an epic piece in which she sat motionless for hours each day, while a spectator sat and gazed back for any amount of time desired.

The first half, detailing preparations for the show, also shows archival footage of Abramovic’s art. This includes work done with the German artist known as Ulay, with whom Abramovic had a turbulent affair. Their lasting connection, shown most dramatically when Ulay takes the chair in front of Abramovic, gives the film a gleam of romance.

The second half offers shot after shot of the people who sat opposite Abramovic — an unexpectedly enthralling record of reactions that range from stark agony to rather phony amusement.

“Marina Abramovic: The Artist Is Present’’ backs the notion that this is art, although it’s possible to walk out with doubts. What won’t be in question is why thousands of people lined up for hours just to make eye contact with this astoundingly magnetic woman.

Marina Abramovic: The Artist Is Present