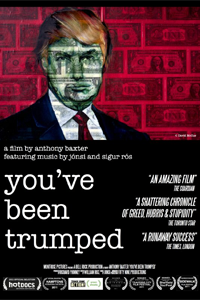 "You've Been Trumped" sounds like a setup, a well-meaning contrivance with a preordained conclusion. It could have turned out that way, but the reality of this surprising — and surprisingly disturbing — documentary is much more eye-opening than that.

As it happens, "You've Been Trumped" lives up to both interpretations of its title. It involves not only being bested, but being bested by the blustery Donald Trump, the shameless self-aggrandizer and real estate accumulator whose forays into northeast Scotland are the focus of the efforts of director, co-writer and cinematographer Anthony Baxter.

It was to Aberdeenshire, to be specific, that the Donald decamped in 2006. He purchased the 1,400 acre Menie Estate and announced that he would build "the greatest golf course anywhere in the world" on the site, not to mention a 450-room hotel and 1,500 luxury homes.

As was to be expected, not all local residents were delighted by this gargantuan alien invasion, a situation that has more than a little in common with the plot of 1983's Scotland-based "Local Hero," clips of which director Baxter has shrewdly interspersed with his own footage.

The most expected, but still entertaining, aspect of "You've Been Trumped" is the contrast between Trump, who emerges like a Mafia don from his private jet, flashing his trademark golden hair with tie to match, and the decidedly more humble and eccentric inhabitants who live on lots adjacent to the golf course and would really rather not move.

These include 88-year-old Molly Forbes, who proudly points out her father, a local ploughing champion, in old newsreel footage; Molly's cantankerous son Michael, and Mickey Foote, a returning native who produced the first Clash album while he was living in London.

Trump, who has never been accused of shyness, is particularly vocal in his contempt for these folks, and the thought that his future customers may catch a glimpse of Michael Forbes' house makes him particularly apoplectic.

"For people to have to look at this virtual slum is a disgrace," he tells a TV interviewer. "I happen to be a very truthful person, and he lives like a pig. The property is terribly maintained, it's disgusting."

The intercutting of the Donald's hyperventilating with the quaint lives of the locals is no less valid for being expected, but "You've Been Trumped" is about much more than a nostalgic wish that change could be stayed and ye olden times preserved forever.

For what does not seem at all like business as usual is the astonishing lengths Trump's allies go to make sure that his will is obeyed down to the smallest detail. "You've Been Trumped" is a potent study of the intimidating power of money not in theory but on the ground, an examination of how a wealthy man with a boundless sense of entitlement can strong-arm all opposition without really breaking a sweat.

Trump power was first evident after the Aberdeenshire Council, led by politician Martin Ford, initially rejected the development. In an unprecedented step, the Scottish national government, led by First Minister Alex Salmond, overturned that decision, took it out of local hands, and gave the project the go-ahead.

And though Trump liked to proclaim that his golf course was the best thing for the environment, that turned out to be untrue. In fact, as numerous scientists testify, the course would basically destroy an officially designated Site of Special Scientific Interest, the only natural dunescape left in Scotland, called by one aggrieved academic the equivalent of that country's Amazon rain forest.

Things get more personal, and more distressing, once actual construction begins. We see how powerless the local people are as Trump's forces cavalierly destroy wells, cut off power and, in one case, out of pure Trump spite construct a 30-foot-high earthen berm that towers over one poor man's house.

Anyone thinking of complaining to the police is witness to, as Baxter's indefatigable camera records, the ways in which the local constabulary are very much on the side of the rich and powerful. Even Baxter himself gets arrested at one point for doing no more than conducting an interview. To see the glib and brazen way Trump habitually confuses bullying with honesty makes for a shameful situation all around.