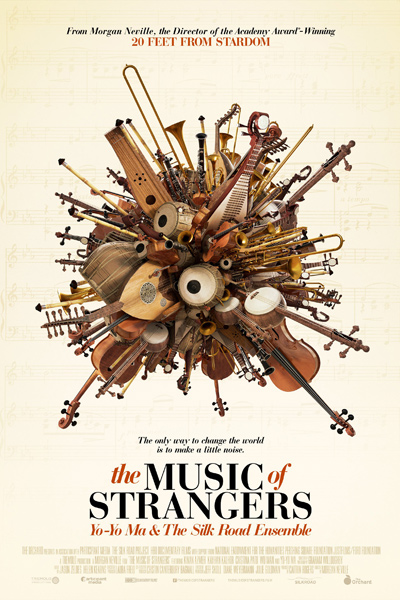 Morgan Neville, who won an Oscar two years ago for his delightful music documentary “20 Feet from Stardom,” returns with a bona-fide gem that is deeper, more spiritual, just as delicious and completely irresistible.

Virtuoso American-Chinese cellist Yo-Yo Ma since 1998 has recruited a troupe of more than a dozen global music superstars to rock out in his Silk Road Ensemble, jamming with a thrilling, propulsive beat. Whether it’s the broadly grinning Ma’s cello, a vibrant Indian tabla, Syrian clarinet or Chinese lute, every sound melds into a universal language.

The group’s deeper focus is encouraging audiences everywhere to fall in love with diverse international traditions, and their concerts are goose bumps extravaganzas. (Rather hot, too. Cristina Pato, a bagpipe pop star in Spain, is an irresistible coquette.)

Ma’s project and Neville’s film celebrate the joy that can be achieved when people put aside their regional differences to create something joyous. China’s charming Wu Man, a wizard on the stringed pipa, seems just a tad iffy about naming the group after an ancient 4,000-mile trade route. “There is no East or West,” she says. “It’s just a globe.”