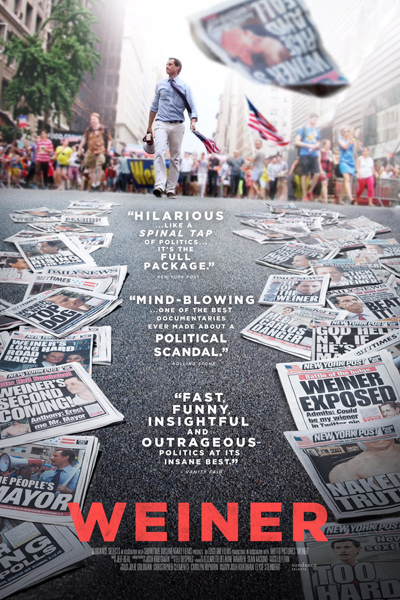 Anthony Weiner plummeted from firebrand Democratic New York congressman to a juvenile national joke in 2011 after lascivious and salacious texts and photos he sent to various women became public.

But that’s only a small part of the story in Weiner, the fascinating and timely documentary about a disgraced politician trying to claw his way back into the public’s good graces, the media’s obsession with titillation and confrontation, and a marriage seemingly near collapse under the shock of scandal and resignation.

Directors Josh Kriegman and Elyse Steinberg began filming as Weiner launched his bid to be the mayor of New York City in 2013. He was trying to crawl out from under the shadow of shame while putting his rocky marriage to Huma Abedin — a public figure in her own right as Hillary Clinton’s longtime aide — back together and helping raise their young son.

Things seemed to be going relatively well in the mayoral bid until even more explicit texts came to light, sending his campaign, and possibly his marriage, into a terminal tailspin. It becomes obvious at this point that the documentary won’t be about the joy of an underdog’s crusading comeback but about a man’s ambition and delusion crushed under the hard, cold wheels of political reality. He fell 10 points in the polls in one week.

At this juncture, no one would have blamed Weiner and Abedin for pulling the plug on the filmmakers’ project, telling them to pack up their gear and go home.

Instead, they let the cameras keep rolling, recording their most discomfiting moments as a couple and Weiner’s most humiliating moments as a man. There’s a scene, after the news about the second texts comes down like a hammer blow, where they are captured alone in his office in an awkward, icy quiet.

Similarly, near the end of the documentary, Kriegman asks Weiner why he let them film all that happened: the embarrassing TV interview with Lawrence O’Donnell, the constituents’ heckling and the scenes from a fractured marriage along with the desperation, the pandering, the pain and, ultimately, the failure.

Weiner doesn’t have an answer.

Nothing is spoken but everything is said, and the silence is deafening.