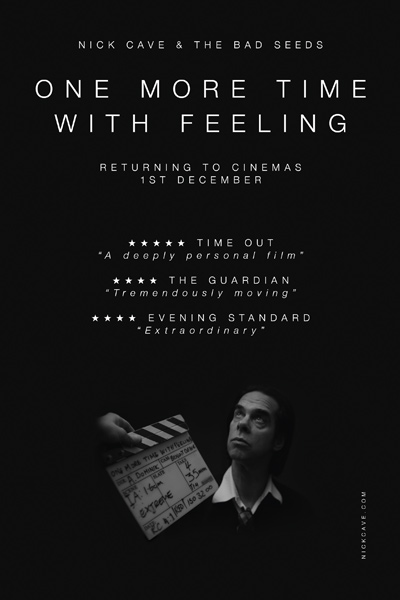 What was (as I'm sure many people now know) originally to be a Documentary film about the making of Nick Cave and the Bad Seed's sixteenth studio album The Skeleton Tree became, during it's making, a transformation into something far more intense and poignant due to the tragic personal circumstances that occurred during the Documentary's realisation (namely the death of Cave's 15-year old son Arthur). That a choice was made to go on making this documentary beyond that point shows a sense of dignified bravery and openness by the artist, his family and other band members that, handled badly by the director, could have come across as truly uncomfortable viewing (in the wrong sense), even trite. I'm glad to say that Andrew Dominik (director of Chopper in 2000 and of The Assassination of Jessie James by the Coward Robert Ford in 2007) avoids all this in what must have been an almost epic task of filming an artist working with and through the tragedy of loss, how that loss permeated all aspects of the new record he's working on, and thus superseding anything else by dictating all creative processes. Making this beautifully shot, richly textured black and white (and occasionally colour) Documentary in 2D and 3D was ultimately a brave choice by all involved but also it's a response by creative people to tragedy, to attempt to go on creating - and this is a documentary that resonates with artistic struggle and personal loss as they converge.

Of course Nick Cave and the Bad Seeds have always been a band with a certain filmic pedigree, be it their live Berlin performance captured so exquisitely in Wim Wenders' seminal masterpiece Wings of Desire in 1987, some excellent Documentaries such as The Road to God Knows Where (1990) or 20,000 Days on Earth (2004) and of course the many film scores Nick Cave and Warren Ellis have made together (2007's The Assassination of Jessie James by the Coward Robert Ford to name but one – which also featured a Nick Cave Cameo). And let's not forget that Nick Cave also wrote the screenplay (and again the music with Warren Ellis) for John Hillcoat's The Proposition (2005). And so it seems fitting that a band that has always managed to exist as a collaboration of genuinely talented artists in their own right whilst also being a constantly evolving creative unit in itself, should thus have incorporated the cannon of film into their creative processes. And this film is very much a film about the creative process, but of course after a tragedy that changes the dynamics of the process, the struggle changes, the artist himself changes and Andrew Dominik's film achieves a moving, elegiac documentation of the response to this.

It should be duly noted that this film is also interjected with many moments of subtle humour, and at various points the cinema I watched the film in resounded with laughter. A lot of this humour served to show the closeness and respect in the band between each other or between Nick Cave and his wife Suzie Bick, the subtle knowing kindness between Warren Ellis and Nick Cave revealed in dialogue in the recording studio for instance, and Cave's own respect for Ellis and his wife. And in these sessions some beautiful songs are captured by Andrew Dominik and his cinematographers (Beniot Debie & Alwin H Kuchler) in detailed circular 360-degree tracking shots which often wondrously pan away (via various keyholes or cracks) out into the sky above (while the music plays on). And so against everything else this is also a Documentary with some superbly captured moments of a band achieving levels of creative musical perfection in the studio juxtaposed with moments of personal doubt (often in voice over from Nick Cave himself) when that creativity doesn't flow. Furthermore, starkly shot dialogue sequences always remind us that Nick Cave and his family are involving themselves in this project at a time of great suffering, and analysing this openly on film (whilst often questioning the nature of the film itself too). Set against these intimate close-up moments of dialogue are epic, spiralling shots from the vast heavens above us looking down upon London and Brighton. What of course transpires is that the Documentary One More Time With Feeling and the album The Skeleton Tree are so deeply imbued with this loss that the two are completely inseparable. Many of the characteristics of the enigma that has become Nick Cave are stripped bare in the face of this trauma, the challenge to create music a painful one, the inability to improvise or narrate, this is very much about life after the 'event.'

There'll be a lot of respect for the fact that this film was made, that viewers have somehow been granted access into the process, that elements of this tragedy were shared with us, that moments of the family's loss have been laid open, lending a personal poignancy which is honest and moving. Internal shots and scenes from the family home of course lend further legitimacy to this. Whilst the Documentary doesn't offer any kind of Cathartic resolution (how could it) what it does show is the ongoing need of creative people to keep working in response to tragic events, this is what drives the people we're viewing as they question their creative identity's ability to deal with this, and this is what compels us to watch. The film's final shot of an empty frame and then the closing sequences and song reveal just how personal this documentary has actually been, how radically differently it was from the intended one, how events dictated something else but importantly the integrity involved in the decision by all involved to eventually carry on with the filming, to let us in.