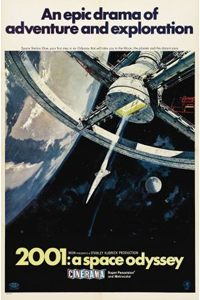 Stanley Kubrick’s 2001: A Space Odyssey is one of the greatest films of all time and it is the director’s most profound and confounding exploration of humanity’s relationship to technology, violence, sexuality and social structures. Kubrick’s philosophical inquiries about the nature of humanity are explored to various degrees throughout all his films but in 2001: A Space Odyssey he explored his preoccupations most substantially by examining the place that humans occupy in the universe, asking some extremely weighty questions about the way humanity has evolved and suggesting what the next stage of our evolution will be like.

Although loosely based on the short stories ‘The Sentinel’ and ‘Encounter in the Dawn’ by the acclaimed science-fiction author Arthur C. Clarke, who would simultaneously write the novel 2001: A Space Odyssey while Kubrick wrote the film’s screenplay, the film transcends its literary origins. 2001: A Space Odyssey is a work of cinematic poetry and its combination of philosophical musings with its special effects, sound design, production design, cinematography and editing make it just as visually impressive and thematically fascinating now as it was when originally released in 1968. It is a film that has inspired countless science-fiction films since, including Duncan Jones’s acclaimed feature film début Moon (2009), which is a direct homage....