Unshaken: The Road to Woo

With Wendy Woo in person! 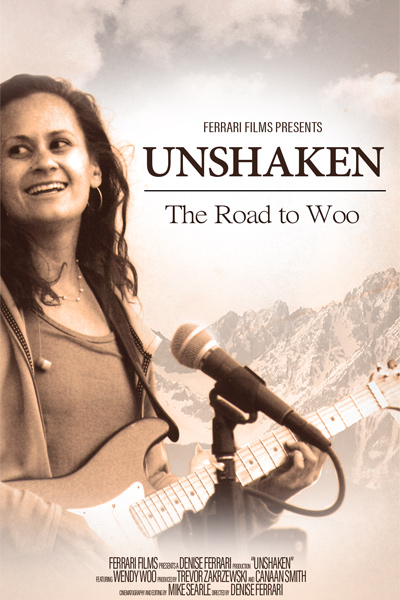 Documentary to be followed by a live performance from Wendy Woo! Please note special pricing.

"I'm sorry," Wendy Woo says over the phone one recent afternoon, "I feel like I'm not a hundred percent focused. I'm taking a defiant pre-teen to the orthodonist."

If anyone in the car with Woo is defiant, it's impossible to hear over the phone. There's just modest commotion and laughter — the unmistakable sounds of a family.

And if Woo is distracted, that's not evident either as she discusses her life: parents who were founding faculty at Naropa University; Allen Ginsberg hanging out in her family's hot tub; the first time she picked up a guitar at 18 and the subsequent 25 years during which she became one of Colorado's most beloved singersongwriters.

It's no wonder Denise Ferrari decided to make a documentary about the oftcalled Queen of the Local Scene and her band. The 40-minute film, Unshaken: The Road to Woo, had its first screening at Stargazers Theatre in Colorado Springs on May 17.

Ferrari is the president of Monument, Colorado-based Ferrari Films, and a longtime fan of Woo. In recent years, the film company has produced a spate of original content, some of which has focused on trailblazing women. Woo was a perfect fit.

"Last summer I attended a concert of hers in my community and, after the show, I approached her to see if she was interested in working together on a documentary," Ferrari says. "I'm not sure that she thought I was serious, but when I followed up the next week, she was enthusiastic about the project."

For two weeks, Ferrari and her team filmed The Wendy Woo Band during concerts, doing interviews at their homes, interviewing Woo's three children. ("My son said, ‘I didn't get enough screen time,'" Woo says with a laugh.)

"It was very touching for me," Woo says. "And no matter what this movie does, it's a nice gesture, a nice gift for me to watch my life like that."

The movie's title, Unshaken, is a nod to the first track on Woo's first album, 1997's Angels in the Crowd.

"There's a road I've never taken/ There's a path I've never seen/ There's a place that won't be forgotten/ Just to wonder, to only dream/ About the other road we have chose/ Unshaken by your dreams."

Today the song reads like a premonition, as though Woo understood even in the beginning that she was going to buck convention and eschew the trappings of high-level fame. But she certainly flirted with that fame.

In 1999, Woo won the Colorado Lilith Fair Talent Search and went on to share the stage with elite performers like the Indigo Girls, Shawn Colvin and Sheryl Crow. She was inducted into Westword's Hall of Fame after winning the "Singer-Songwriter of the Year" award five times.

Soon it was all laid out before her: The songwriting bigwigs of Nashville offered her a clear-cut path to Music City, U.S.A., where she could be a songwriter for other artists, making money, meeting stars... and perhaps living a life that wasn't in line with her values.

But having a family was just more important.

"I just don't look back," Woo says. "I think that every choice I've made brings me to right here. So I have very few regrets. Maybe just being a better person in situations, but I think there's always tomorrow to do better. I feel like I landed in a really nice place with some really great kids around me. You don't want to go back and erase that. I love the path that I've chosen."

The path hasn't always been easy, as the documentary shows. Woo has navigated the grief of losing first her mother and then her father. Her marriage to bandmate/drummer Christopher Maestas gave Woo her two eldest children, but the marriage was fraught with conflict that led to divorce.

Yet the band stayed together because Woo and Maestas continued to value one another as musicians and business partners. In the documentary, Ferrari deftly illustrates how the band lovingly, often humorously traversed tense moments, particularly when Woo found new love in her now-husband, Charles Snyder.

And yes, there was a fight.

"There's nothing really that interesting about [my life]," Woo says with charming humility. "It's just my life playing music, so we laugh [about the fight between Chris and Charles]. We're like, ‘That's almost the most interesting part of the story.'"

But Woo is a character full of good humor, resilience and talent. What makes the story interesting -- even if Woo demurs -- is that she's a real human, open and vulnerable. It's also what makes her music so endearing and long-lived.

Woo has maintained a blue-collar approach to her life, managing her own recording, producing, booking, publicity and publishing through WooMusic, Inc.

And while she still stays busy these days with gigs across Colorado with her band, being a working musician is admittedly tough. Several years ago she worked as an EMT, transporting elderly folks in a retirement community because she "just wanted to be of assistance." These days, with her kids all in school, she's back to bartending (she was one of the first employees at the Fox Theatre, which helped launch her career) in Loveland, where she lives with her husband and children.

It's all a part of what makes Wendy Woo so beloved.

"Wendy is an inspiring example of a Colorado business woman," Ferrari says. "As an entrepreneur myself, I understand many of the challenges that are involved in running a business, balancing work and family, and dealing with a variety of personalities along the way. Wendy has done all of this, and remained true to herself, her family and bandmates, and her fans."

Unshaken: The Road to Woo