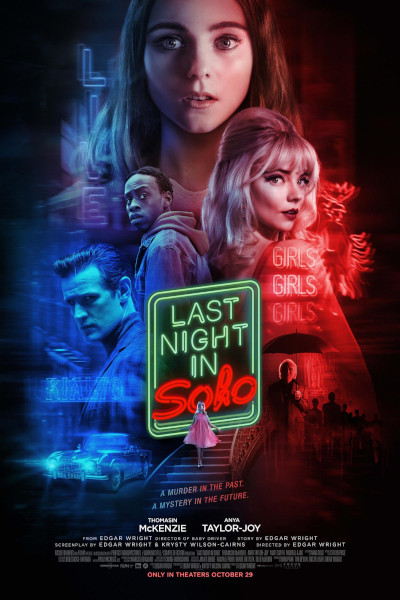 Last Night in Soho has been called a critique of nostalgia for the so-called “Swinging Sixties”, which is popularly remembered as a time of opportunity, counter-cultural excitement, and new freedoms. The film follows Elsie (Thomasin MacKenzie), an aspiring fashion designer who moves to London in the present day. Elsie is enamored with 1960s music, fashion, and culture, and she begins to see the London of the 1960s in her dreams, through Sandie’s (Anya Taylor-Joy) eyes. Gradually, the Soho of Elsie’s dreams is revealed to be false—instead, it’s a dangerous place where young women like Sandie and Elsie are at constant risk of being exploited, where the lure of opportunity and freedom hides the sexist forces that are ultimately in control. But while the film critiques a particular strain of ’60s nostalgia, it is not a whole-cloth dismissal of nostalgia itself. Rather, the film champions an alternative nostalgic narrative: nostalgia for a different 1960s, in which young women could be each other’s allies. And in this more critical, subversive nostalgia, the film suggests that alliances between women could reshape how we make music and art today. – Alexandra Apolloni