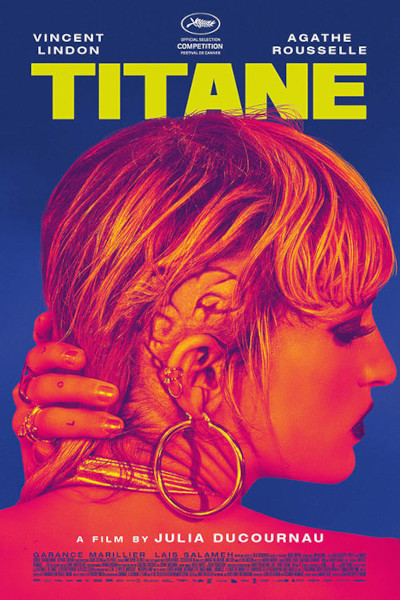 There something human in the way Julia Ducournau handles the inanimate car in Titane. The opening shots of the innards of the machine approximating a person’s intestines; human blood and bodily discharge turning into motor oil or the heroine Alexia (Agathe Rousselle) brushing, stroking, grazing, fondling, cuddling, and spreading herself to try and embrace the car and surrendering to it in an act of passionate love. To the contrary, mechanization is at the core of Alexia’s being. With a titanium plate fixed in her head after a car accident in her childhood, it’s as though a robotic beast has come to possess her, clinging staunchly to the chaos raging within. It makes a deviant out of her—a masochist and misanthrope who maims and kills others and harms her own self mercilessly till she insinuates herself into the world of the aging firefighter Vincent (Vincent Lindon) as his long-lost son Adrien. After battling through the stormy sea of life, is he the port that her ship needs to dock into? In turn, does she mirror Vincent’s own lost soul? Ducournau crafts a peculiar, grotesque tale centred on these man-machine and human-beast contradictions. What’s more, the film, that got Ducournau the Palme d’Or at the Cannes Film Festival and is France’s entry for the best international film Oscar (though it failed to make it to the shortlist), is itself balanced on artistic paradoxes—it is at once revolting just as it is mesmerizing. - Namarata Joshi — https://www.nationalheraldindia.com/films/film-review-titane