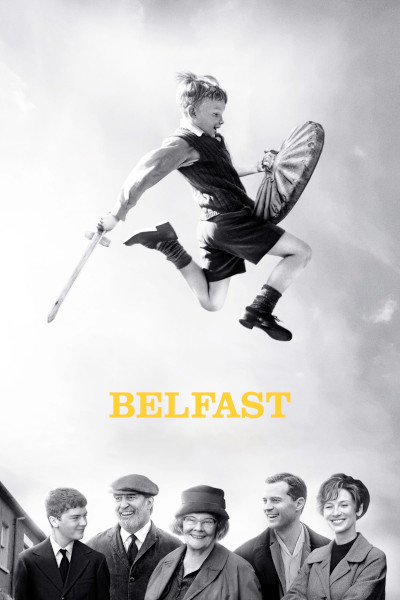 “Belfast” is unquestionably Kenneth Branagh’s most personal film to date, but it’s also sure to have universal resonance. It depicts a violent, tumultuous time in Northern Ireland, but it does so through the innocent, exuberant eyes of a nine-year-old boy. And it’s shot in gentle black-and-white, with sporadic bursts of glorious color.

In recalling his youthful days in an insular neighborhood in the titular city, Branagh has made a film that’s both intimate and ambitious—his “Roma,” if you’ll forgive the inevitable comparison to Alfonso Cuarón’s recent masterpiece. That’s quite a balancing act the writer/director attempts to pull off, and for the most part, he succeeds. It’s hard not to be charmed by this love letter to a pivotal place and time in his childhood, and to the people who helped shape him into the singular cultural force he’d become. Long before the dedication that plays in front of the closing credits—“For the ones who stayed. For the ones who left. And for all the ones who were lost.”—we can feel Branagh’s wistful heart on his sleeve…

…Given Branagh’s longtime stature as an actor, it’s no surprise that he’s drawn warm, authentic performances from his top-tier, perfectly chosen cast. Within this modest, working-class, Protestant setting, Buddy—Branagh’s stand-in, played by the irrepressibly winsome Jude Hill— views his parents as movie-star glamorous—larger-than-life as the actors in the pictures he yearns to see each weekend at the local movie house. Known to him (and to us) only as Ma and Pa, his mother (Caitriona Balfe) is elegant and feisty, while his father (Jamie Dornan) is charismatic and kindhearted. Judi Dench and Ciaran Hinds have an effortless chemistry as his grandparents, teasing each other mercilessly from a place of deep love and affection and a lifetime of commitment—to each other, to this place.